George Afriyie rules himself out of Asante Kotoko CEO job 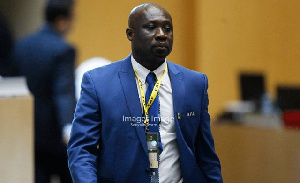 Following the dissolving of the management team of the Ghana Premier League giants which had George Amoako as its CEO, the role has been left vacant.

Several reports in the past few weeks have indicated that the two candidates being considered for the job are George Afriyie and Nana Yaw Amponsah, all former aspirants of the Ghana Football Association (GFA) presidential position.

In a statement from George Afriyie today, he has noted that he is aware of the interest but will not be able to take up the role because he is currently committed to a different job.

"In the aftermath of the GFA Presidential elections, I received several calls from Kotoko faithful and followers urging me to consider taking up the position of the CEO of the club. I still continue to receive such calls and messages on a daily basis.

"Kotoko is a great club and I would want to serve one day. But, I want to state that I have currently taken up a commitment I which would not permit me to take up the role", the football administrator said.

Below is the statement from George Afriyie: 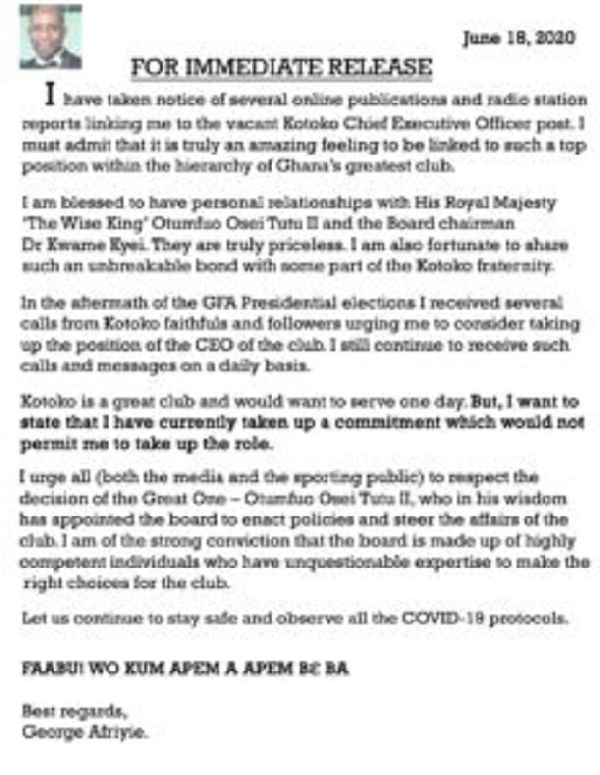 Arteta on the absence Gendusa in the application: Some things should change, but they don't
Klopp on the championship corridor from city: I don't need it. We don't celebrate events from a week ago
Inter will announce the transfer of Hakimi after the end of the season
Zidane on Hames' words about Real Madrid: I understand him. He wants to play more, which is normal
The environment of Grisman outraged by the behavior of leopards. They believe that Messi can change the situation
CEO akhmata about Glushakov: We are happy with it. We will discuss the future at the end of the season
Arteta Pro 4:0 with Norwich: Arsenal are moving in the right direction
Source https://www.ghanaweb.com/GhanaHomePage/NewsArchive/George-Afriyie-rules-himself-out-of-Asante-Kotoko-CEO-job-983857

The value of digital currencies

The Nationals of the Ghanaian Nation

Don’t be static in life; look for new avenues to better yourself - Kwami Sefa Kayi

‘Sir John was a good man, I will miss him’ – Bawumia mourns

West Ham vs Chelsea: Lampard reveals why they lost 3-2 in EPL clash

Ndigbo: Before Restructure, Beyond Biafra

“Never Give Up Is My Motto” – Faruiza Osman

“Never Give Up Is My Motto” – Fairuza Osman

“Sir John was a good man”-Veep

Crude revenue drops 5% despite 15% increase in production for 2019

Finance Committee of GFA to decide on FIFA Relief Fund

CAF votes $300,000 each for member associations

Don’t use violence in challenging registrants

We are satisfied with the registration processes – NPP party agents

Another batch of stranded Ghanaians in UK return today

Coronavirus has saved NPP in the upcoming elections – A Plus

Kwabena Kwabena Reportedly Living In A Kiosk After Going Broke

Once A Child Is More Than 2 Years, He Or She Shouldn’t See A Parent Naked – Nollywood Actress |

Some popular interviews of Sir John

Some popular interview of Sir John

“Our Teachers Lied To Us, Mathematics Is A Useless Subject”

Tamale: Man Killed After Rescuing Girl From Being Raped

My Son Has Seen My Nakedness For 7 Years – Akuapem Poloo |

African Women In The Time Of Covid-19: 10 Selected Films Announced

Rapper, Olamide Celebrates His Second Son On His First Birthday