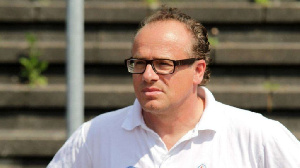 The Black Stars have set their sights on securing qualification for the 2022 World Cup and as well win the Africa Cup of Nations in Cameroon next year.

Ghana are looking to end what will be a 40-year drought in the January 9 - February 6 continental finals.

"We have to get used to [the players] and find a final squad, and we also have to establish this team," Lippert has told Citi Sports .

"If we really want to qualify for the World Cup and be successful in the Afcon, we have to get a little bit more quality and we have to play more successful and maybe also more attractive football."

Ghana handed Sao Tome and Principe a 3-1 defeat and drew 1-1 with South Africa to secure qualification for the upcoming Afcon finals.

“[My time with the Black Stars] is honestly too short to judge everything now after just five months. We are still in the process of selection," Lippert, who took over as Ghana technical director in October last year, said earlier this month .

"We have a lot of players, I think more than 50, and it’s time to finish the selection process and concentrate on a squad of 25 to 30 players and really prepare them tactically and in group tactics to make the team really strong.

“We played almost every match with a different squad and this, in my opinion, was maybe a little bit too many changes because we changed too often.

"But at the end of the day it was also necessary to find out the best players. We have a new coaching staff so we also will love to get used to them and find a final squad.”

The final draw for the Afcon finals will be conducted on June 25.

In the World Cup qualifiers, Ghana have been drawn against South Africa, Ethiopia and Zimbabwe in the second round, which was originally set to commence next month but has now been postponed to September.

Celebs in tears as popular actor passes on [Photos]

Ghana set for biggest crop harvest in a decade

Police officer’s death could have been prevented – Minority

Smart policing must be adopted in this modern era – Minority

Railways Minister happy with investments in the sector

DJs can generate revenue by performing on songs – DJ Kofi