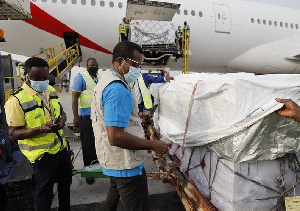 Ghana is set to receive some doses of coronavirus vaccines

Programmes Manager of the Extended Programme on Immunization (EPI), Dr. Kwame Amponsa-Akyianu has disclosed that the country is set to receive additional doses of the COVID-19 vaccine next month.

His statement comes after the Africa Centres for Disease Control and Prevention (Africa CDC) announced that it cannot predict when the second doses will arrive in Africa as a result of delayed deliveries.

But Doctor Amponsa-Akyianu speaking to Samuel Eshun on the Happy Morning Show explained that his outfit has documentation that indicates that the country will receive its allocated vaccines.

“We have indication that within the next month we will have additional doses not just 600,000 but the originally planned allocation that through COVAX we will be receiving. We have had some documentations to that effect that we will receive them. When we don’t have the exact date, there is nothing to communicate”, he stated.

The Programs Manager was confident that the country took the best decision when it decided to vaccinate its citizens with the first 600,000 doses received from the COVAX facility as the first doses and was very sure that the next batch for the second doses will arrive as expected.

“Within COVAX we had an indicative allocation of 2.4 million of which they brought 600,000. The country took a decision; do we keep 300,000 and start with 300,000? At the time that was not a wise decision to take because we know that first doses are protective and scientifically it is better to get a lot of people having had the first dose than getting a few people having two doses, so we took that decision as a country and we thought that was a better decision”, he furthered.

Currently, over 700,000 people have been vaccinated with the AstraZeneca vaccines. The country is awaiting additional vaccines to administer the second doses.