Both the General manageress of Ghone Television Nana Aba Anamoah and her Chief executive officer Bola Ray were in a sad moment as they sorrowfully buries their worker Nii Adjei Okine.

” Fare thee well” Nana Aba Anamoah wrote on her facebook page to depict her sorrow. Other men at the funeral were technical members and presenters of the Ghone Television station.

Nii Adjei Okine was one of the hardworking workers of Ghone Television network. His death brought a total shock in the entire media space. Yesterday, his colleagues at Ghone Television organised a vigil for him. They sang sorrowful hymnal and embarked on a scented candle procession.

We know this is not easy to deal with. May the Almighty God strengthen Nana Aba Anamoah, her boss Bola Ray and the entire family.

To the dead, may his gentle soul continue to rest in perfect peace till we meet again. 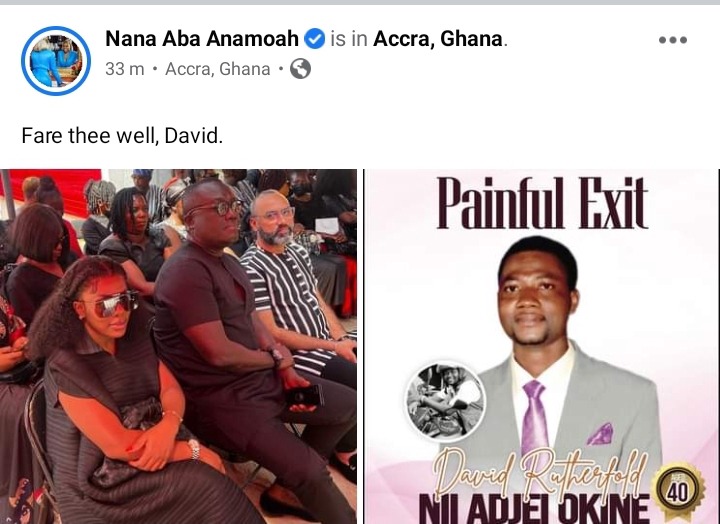 Content created and supplied by: Pen_Sound (via Opera
News )

We Can Do Better – Ben Nunoo Mensah

Blood Psalms to premiere on Showmax on Wednesday, 28 September 2022

3 Gunned Down At Bawku

Just In: The EPL Team Of The Week Is Dropped.

Get ready to go home; none of you can ‘break the 8’ – Bawumia and Alan told

NPP writes to Alan Kyerematen, Adorye summoned over ‘Aduro Wo So Health Walk’

The Late A.B Crentsil To Be Buried On November 5 |

Kim Plath: Has She Found a New Man? Already?!?

COVID-19: It Is Not Over, Get Vaccinated – Dr Nyarko | Social

Woman charged with murder after kiss with inmate during visitation

All done deals for Kumasi Asante kotoko this transfer window.

Ways of coping with loneliness.

I will return to Ghana if I get one tipper truck, I’m tired – Germany-based Ghanaian

148,000 workers’ bio-data do not match any Ghana Card details – Bawumia

Men: Before Thinking Of Having A Large Manhood, See The Disadvantages Or Adverse Effects