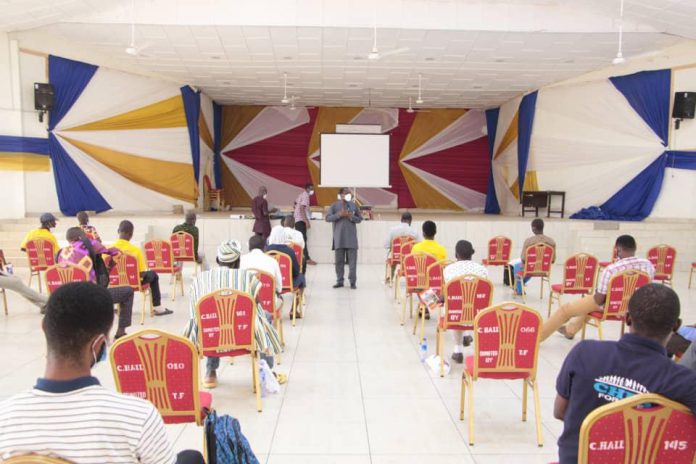 The LSM training, which will be replicated across the country, brought together about seventy (70) health workers from ten districts in the Upper East.

Speaking at the opening ceremony in Bolgatanga on Monday, May 10, 2021, a Senior Research Fellow at NMIMR, Dr Kwadwo Frempong, said it was not the first time his outfit was engaging in such an exercise.

He said the exercise basically brings together health workers under the Malaria Control Programme, GHS staff members and Zoomlion workers to undergo training in LSM implementations.

“It involves helping them [the participants] to identify mosquito species and then helping them to know the sources where mosquitoes basically breed,” he explained.

He noted that the training will be an add-on to the already Malaria control programmes in the country, which are the indoor residual spraying (IRS) and the use of long-lasting insecticide nets (LLINs).

According to Dr Frimpong, some of the advantages of LSM included support to the insecticide resistant challenges and also helping to control mosquitoes at the larva stage.

“LSM also helps control behavioural issues/changes in adult mosquitoes which the IRS and LLINs) do not but only target mosquitoes that rest and feed indoors,” he added.

He said the LSM when implemented well will inure to the enormous benefit of communities, adding that “we can have a community supporting the control of mosquitoes because we have one aspect of it which is environmental management where the community is involved.”

“There was full cooperation among the stakeholders,” he expressed.

He said the project was centred on mosquito larvae “that is, the baby mosquito and not the mosquito itself.”

He went on to disclose that the chemical used by his outfit to fight the mosquito larvae which only worked in water bodies was a biological product.

“Last year, we were using Bacillus thuringiensis subspecies israelensis (Bti). It works best when you put it into water bodies. One challenge that we had with what we were using previously, that was 2009 and 2020, is that the chemical or the biological agent is able to last just within one week. So every week, you have to go and do reapplication,” he said.

That process, Mr Djangmah indicated, was quite exhaustive, time consuming which put a lot of financial constraints on the project.

“But thankfully, this time around, we are shifting from the one-week spraying to monthly larviciding. So instead of doing the spraying every week, the product is able to last within the environment for one month. So after a one-month duration, you go back again and do the reapplication,” he said.

Thus, he insisted that this year’s product has a long lasting effect compared to what was being used previously.

LSM, a vector control tool, for managing mosquito breeding sites is only recommended as a supplementary malaria vector control measure which adds on to other core vector control interventions such as long-lasting insecticidal treated nets (LLINs) and indoor residual spraying (IRS).

There are four main types of LSM including: habitat modification, which means a permanent alteration to the environment, e.g., land reclamation or surface water drainage; habitat manipulation, which refers to a recurrent activity e.g. water-level manipulation, flushing of streams, the shading or exposure of habitats; larviciding, which involves regular application of a biological or chemical insecticide to water bodies; and biological control, which involves the introduction of natural predators into water bodies, for example, predatory fish or invertebrates to feed on mosquito larvae or pupae (WHO LSM Operational Manual, 2013).

When appropriately implemented, LSM can contribute to reducing the numbers of both indoor and out-door biting mosquitoes, and in malaria control, it can be a useful addition to programme tools to reduce the mosquito population in remaining malaria ‘hotspots’.

Where appropriate, it can also help programmes to reduce their overall dependence on insecticides, thereby making a contribution to preventing the emergence of insecticide resistance. LSM can also be useful to help control other vector borne diseases, especially dengue as well solve socio-cultural issues in indoor residual spraying programmes as well as LLIN.

WHO recommends larviciding in areas where mosquito breeding sites are few, fixed and findable, and where the sites are easy to identify, map and treat.

I have not retired from Black Stars – Christian Atsu

Hammer, Arnold Asamoah Baidoo apologize for attacking each other

Why do you need police protection for MPs living in a safe country? – Franklin Cudjoe to Ambrose Dery