Government is committed to the welfare of Zongo communities - Bawumia 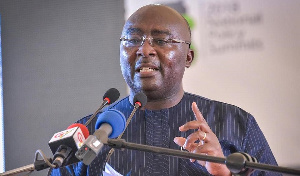 The Government is committed to the welfare of Zongo communities and will continue to invest in their education and entrepreneurial skills development, Vice President Dr Mahamudu Bawumia said on Friday.

He said the Akufo-Addo-led government had sponsored 40 students from Zongo communities to study medicine in Cuba.

Additionally it was the first government to establish the Inner City and Zongo Development Ministry, which subsequently facilitated the setting up of the Zongo Development Fund to improve their infrastructural needs.

The Vice President gave the assurance when he interacted with Zongo Chiefs and Imams at the Chief Dagadu's Palace at Madina Zongo in Accra.

Dr Bawumia said the NPP-led government had constructed 29 AstroTurf since the assumption of office in 2017, out of which 10 were in Zongo communities.

The AstroTurf, he said, would help in unearthing football talents for the nation.

He said when given the nod on December 7, the Akufo-Addo-led government would build model senior high schools in each of the 16 regions in Zongo communities to enhance education among the children.

Vice President Bawumia said the future of Ghana was safe under President Akufo-Addo and urged the electorate to entrust the nation into his hands on December 7 to consolidate the gains made.

He mentioned some government flagship programmes including the Free Senior High School Policy, Planting for Food and Jobs, Planting for Export and Rural Development and One-District, One-Factory, that had improved lives and livelihoods.

He appealed to the electorate to vote massively for Alhaji Boniface Abubakar Saddique, Member of Parliament for Madina, to retain the seat for the NPP.

He donated GH¢50,000.00 towards the renovation of Chief Dagadu's Mosque in the Township.

He was welcomed by enthusiastic party supporters clad in red, blue and white paraphernalia, amid singing of NPP campaign songs.

Ronald Koeman: Barcelona in a difficult month with an abundance of outings showed character and deserved their victories
Frankie de Jong: I started to play closer to the penalty area, so I score more
Manchester United's 13-match unbeaten streak in the Premier League was Interrupted
Buffon on Ibrahimovic's clash with Lukaku: I don't think it's too bad. Tension can result in such words
Tuchel's Premier League debut: Chelsea had a record amount of possession and passing, but never scored against Wolves-zeros
Simeone is in the top 5 in terms of wins in La Liga matches. Diego has the best percentage among the leaders - 62%
Rudy Garcia: It would be great if Benzema would wear the Lyon shirt again
Source https://www.ghanaweb.com/GhanaHomePage/NewsArchive/Government-is-committed-to-the-welfare-of-Zongo-communities-Bawumia-1120295