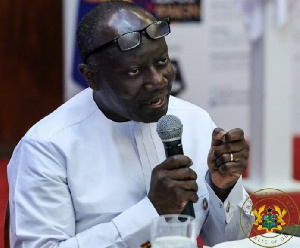 The Akufo-Addo administration is tackling the debt situation of the country Finance Minister Ken Ofori Atta has said.

In nominal terms, he said, Ghana’s debt stands at “GHS291billion representing 76.19 per cent of GDP.”

Mr Ofori Atta said these while speaking at a press conference in Accra on Sunday, May 9 in response to the #FixTheCountry movement.

Analyst have expressed concerns about the debt situation of the country.

For instance, Dr Lord Mensah, a senior lecturer at the University of Ghana Business School, has a critical analysis of the budget statement for the 2021 fiscal year shows that Ghana’s debt situation has gone beyond the 76 percent to record 85 per cent of Gross Domestic Product (GDP).

The 2021 budget statement presented to parliament by leader of government business Osei Kyei-Mensah-Bonsu said the total debt rose from 122billion in 2019 to 291.6billion as at the end of December 2020.

This deficit, according to the budget, includes the cost of the financial sector cleanup up.

Speaking on the Key Points on TV3 Saturday, March 27 in relation to the vetting of Finance Minister-designate Ken Ofori Atta, Dr Lord Mensah said “If you go through the interest payment that we are supposed to have, the financing gap we have created out of the budget is about 41billion and over which we are going to finance and then in the same budget it was stated that our debt stock was around 240 plus billion.

“If you put all these together and then you relate it to our GDP which is about 440plus billion, you will realize that we are heading towards about 85 percent for more than the 76 per cent that has been put out.

“If you look at the budget we are hitting around 85 per cent. If you look at the recent statement that came from the World Bank they are projecting our debt by 2023 to be about 81 per cent of our GDP. I was not surprised.”

Regarding the new taxes that have been introduced in the budget, he told host of the show Abena Tabi that “If you underreport and in the end you turn around and tell them to pay something it will be difficult to explain that to them.

“So, reporting and fully reporting discourse is very important. When it comes to public service there is nothing like mandatory disclosure and then disclosure that you can hold on. For me, the more information you give out to the public the better it is for them to understand you when you are going out with your fiscal policies by introducing taxes. I think we should better in reporting.

“But I understand where the Finance Minister is coming from because, these are information that when it get out there people will be saying even our debt level is now 80 to 85 percent but implicitly if you take the budget critically and you analyze, you will realize that the debt that we have in there as expected by end of the year is even more than 85 per cent of our GDP."