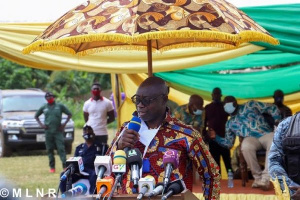 The government has released 40 per cent of 2,000 acres of land acquired for diary farm project at Danfa in the La Nkwantanan/Madina Municipality to the original owners.

The land was originally owned by the stools of Amrahia, Danfa and Kweiman, but government compulsorily acquired it about 50 years ago for the project.

However, the diary farm project has since collapsed, hence the chiefs demanded that government should return the land to them.

Mr Kwaku Asomah-Cheremeh, the Minister of Lands and Natural Resources, announced the release of 40 per cent of the land at a meeting with the chiefs at Madina during a visit by Vice President Bawumia.

The Minister stated that all the parties in the land issue had come to a consensus for an amicable settlement.

Mr Asoma-Cheremeh urged the chiefs to process the necessary paper works on the land released to them in earnest.

He said the traditional authorities had appealed to successive government for release of the land to no avail.

The chief commended the NPP-led government for implementing many life-changing policies and programmes that was improving lives and livelihoods.

He singled out government's boldness in rolling out the Free Senior High School Policy despite facing opposition and criticism from naysayers.

Andrea Pirlo: In my 1st season at Juve, we were behind Milan, but we took the title. Everything depends on us
The judge made two mistakes. De Gea was pushed and there was no foul on our cancelled-out goal. Solskjaer on the loss to Sheffield
Maguire on the defeat to Sheffield Wednesday: We gave the opponent two goals, we didn't play at the level we expected
Wilder on registration in the Premier League: I don't want to talk about the beginning of an incredible rescue. We just want to show what we are worth
Ronald Koeman: Barcelona in a difficult month with an abundance of outings showed character and deserved their victories
Frankie de Jong: I started to play closer to the penalty area, so I score more
Manchester United's 13-match unbeaten streak in the Premier League was Interrupted
Source https://www.ghanaweb.com/GhanaHomePage/business/Govt-returns-40-of-land-acquired-for-diary-farms-in-Danfa-to-original-owners-1120829