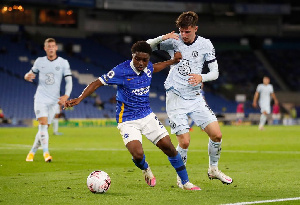 Graham Potter, the manager of Brighton & Hove Albion has said that he will help Tariq Lamptey to reach his full potential.

The 19-year-old who has a Ghanaian descent made the headlines following his brilliant performance against his former side, Chelsea on Monday night at the American Express Community Stadium.

“He took a decision to leave a place that he liked and he respected a lot, but I think he knew the reason why he was taking that decision, which was probably a really tough one for him,” Potter told his club's website.

“He’s got a lot of respect, I know, for Chelsea. But obviously then it’s our job to try to help him make the most of that decision."

“It’s a balance between game time, development, training, and feedback and all that sort of stuff, because like I said he is still young and he’s got a lot to carry on improving."

“He’s a wonderful young player and it’s a delight to have him and a really good lad to work with, because he’s so humble, and it’s just so refreshing, how he plays football.”

“He brings a freshness, a personality, and he brings a quality. Our job is to try to help him improve because I’m sure he’ll say the same in that he’s got a lot to learn, he’s only young."

“But he’s also got some really good attributes that are exciting, and we need to try to help him make the most of those,” Potter added.

Lamptey, who was developed at Chelsea burst into the scene last season when he put up a superb performance against Arsenal in his EPL debut.

His performance attracted Brighton who paid £4 million for his services in January.

Hans-Dieter flick: I Hope Alaba will sign a contract with Bayern. Our club is one of the best in the world
Diego Maradona: Messi gave Barca everything, brought them to the top. He was not treated the way he deserved
Federico Chiesa: I hope to leave my mark in Juve. We will achieve great results
The Coach Of Benfica: I don't want us to look like the current Barcelona, it has nothing
Guardiola on returning to Barca: I'm happy at Manchester City. I hope to stay here
Fabinho will not play with West ham due to injury
Ronald Koeman: Maradona was the best in his time. Now the best Messi
Source https://www.ghanaweb.com/GhanaHomePage/NewsArchive/Graham-Potter-vows-to-help-Tariq-Lamptey-to-reach-his-potential-1063147

#EndSARS: ‘The Protests Was Always Bigger Than SARS’ – Rapper, Vector

‘Made In Lagos’ Breaks New Record; Peaks At No 1 On UK Apple Music Albums Chart

Ghanaian hiphop artiste J Ice out with ‘Ten over Ten’

Building quantum computing systems, one photon at a time

Three shot in another broad daylight robbery at Kumasi

One dead, others injured in accident on Kintampo-Techiman highway

We will tidy up your mess – Mahama tells Akufo-Addo

Youth In Afforestation Campaign For Nana

I’m Not An “Ashawo”, I Use Money From My Restaurant And Clothing Line to Fund My Lavish Lifestyle’- Salma Mumin

Chris Brown And I Still Love Each Other-Rihanna Says

My wife, Tracy, does not buy food from the roadside; she always prefers to eat at Kempinski – Sarkodie » ™

“I’m Too Shy For Stand-Up Comedy

Contracts for sale: Suspended PPA boss should be sacked – CHRAJ

Shatta Wale causes a stir as he strolls Tip-Toe Lane

“I Will Perform At Shatta Michy’s Wedding, I Want To Make Her Happy”

Mr Drew & I are no longer together -Afia Schwarzenegger