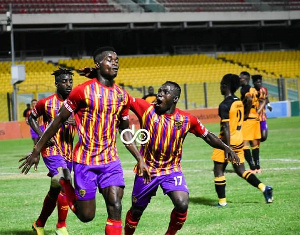 Accra Hearts of Oak striker Kwadjo Obeng Jnr will be available for selection when the Phobians plays Inter Allies in their Ghana Premier League (GPL) Matchday Three encounter at the Accra Sports Stadium on Sunday.

Obeng Jnr suffered a minor injury in the club's 2-2 drawn game with AshantiGold SC last Tuesday, but, he has been passed fit to play and, is in line of being selected for Hearts' second game of the 2020-21 GPL campaign.

He scored both goals for the Phobians as they shared the points with AshGold, and, Coach Edward Odoom will hope he continues from where he left off against the Miners if he is selected to play on Sunday.

The player himself has stated that he wants to score more goals for the club this season and help them win silverware at the end of the campaign. The confirmation of his fitness for the tie against Inter Allies is therefore welcome news in the camp of the Phobians.

Hearts will look for a first win of the campaign when they line up against the 'Eleven Is To One' side in their first capital derby of the season. The Phobians have an outstanding league game with Aduana Stars to be played at a later date in Dormaa Ahenkro.

A win over Inter Allies will boost their confidence for the rest of the season as they seek to win a first league title since the 2008-09 campaign when they won the competition by a whisker.

And Coach Odoom will hope his in-form striker will lead the charge on Sunday evening as they go for their first three points in the league and with it, move on to achieve even greater heights.

Lampard on 8th place Chelsea: I can handle the pressure
Wegorst-the first in the history of Wolfsburg to score 12 goals in the 1st round of the Bundesliga. He is in the top 3 of the goalscoring race
Bounou is the second goalkeeper of Sevilla after Palop, who blocked 2 + penalties in the La Liga season
Frank Lampard: Back in December, Chelsea were in great shape. I am concerned that we lost it so quickly
Rodgers on Leicester's fight for the championship: It's too early to say, but in the first half of the season we played consistently and at a high level
Only in one season in the Abramovich era did Chelsea score fewer points after 19 rounds than they do now. Then Mourinho was sacked after 16 games
Werner has not scored in 11 games in the Premier League. He has 1 goal in his last 15 games for Chelsea
Source https://www.ghanaweb.com/GhanaHomePage/SportsArchive/Hearts-of-Oak-s-Kwadwo-Obeng-Jnr-passed-fit-for-Inter-Allies-clash-1120655