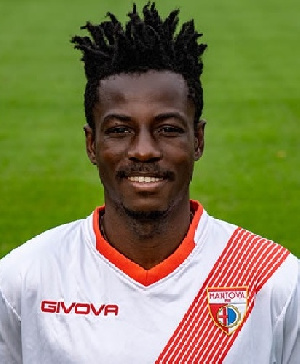 The former Mantova forward completed his medicals on Friday and has agreed to join the Miners on a two-year deal, GHANAsoccernet.com has gathered.

David Yeboah was reported to be joining Ghanaian giants Hearts of Oak but the move collapsed after both sides failed to agree to a deal.

AshantiGold SC has captured the forward to strengthen their squad ahead of their participation in next season's CAF Confederation Cup.

Yeboah spent most of his career in Italy playing for lower tier sides such as Turris, Taranto, Gelbison, Ercolano, Roccella, Messina, Mantova and Chieri.

He has scored 33 goals in 137 appearances during his stints with the clubs mentioned above.

Khabib reacted to Maradona's death: One of the greatest. Millions love football because of it
Gasperini on 2:0 with Liverpool: This is unbelievable. Atalanta played their football
Simeone on Maradona's death: Impossible to believe. He infected us with football. This is a great loss for me
Bayern and city are already in the Champions League play-offs. Who is already with them, and who is in step?
Conte Pro 0:2 from Real Madrid: We saw the difference between them and us. Inter made too many gifts
Liverpool have never scored a goal against Atalanta in their home Champions League match
Liverpool lost at home for the first time in 2 years! Gave Atalanta a couple of goals and never hit a goal
Source https://www.ghanaweb.com/GhanaHomePage/SportsArchive/Italian-based-striker-David-Yeboah-set-to-join-AshantiGold-SC-1091905