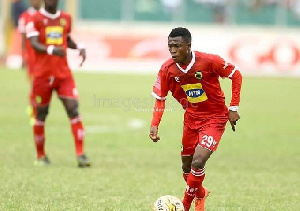 The game was played behind closed doors

Kumasi Asante Kotoko played their first match in a closed stadium as 16-year-old Matthew Cudjoe scored to end a run of two straight defeats by beating Ebusua Dwarfs 2-0 at the Baba Yara Stadium in Kumasi.

The game was played behind closed doors as Kotoko are serving a five-match ban for fans disturbances in last weekend's clash against Berekum Chelsea.

Cudjoe opened the scoring in the 83rd minute with a fine effort into bottom left corner before Richard Arthur sealed the win two minutes later.

Elsewhere in Dansoman, Hearts of Oak produced a stunning second-half performance to earn a 2-1 comeback win against Liberty Professionals.

The Phobians were losing the match until the 86th minute when Bernard Arthur equalised. Three minutes later, Kofi Kordzi grabbed the winner for Hearts.

Yahaya Mohammed extended his lead at the top of the goalscorers chart to six after scoring in Aduana Stars comfortable 2-0 win against Legon Cities FC.

Also, Medeama were beaten for the first time this season by Dreams FC in Dawu.

Alarm in Holy Land after visit by pilgrims with coronavirus

You speak ‘recklessly and backwardly’

Church Of Pentecost, Zoomlion To Clean Haatso And Its Environs

I Will Not Kneel Down Before Any Lady And Propose

Nogokpo, others get new classroom blocks

Accra Popping Colorfully With New Artworks On The Street

‘My Daughter Remained A Virgin Till Marriage’

Check Out The New Artworks Beautifying The Streets Of Accra

SADC appeals for international support in controlling spread of locusts

WHO experts travel to Wuhan for COVID-19 investigation

Inside The Alternative Lifestyle Of Area Fada 1, Charly Boy

Forum Advocates For Development In Northern Ghana Through Stakeholder Engagement

Food poisoning cases in UK more than doubled in 10 years

Sailors should be proactive in global fight against Coronavirus – BMMP

Turkey to seek compromise with Russia on Idlib crisis

Why Many Women Are Unmarried: Omokri