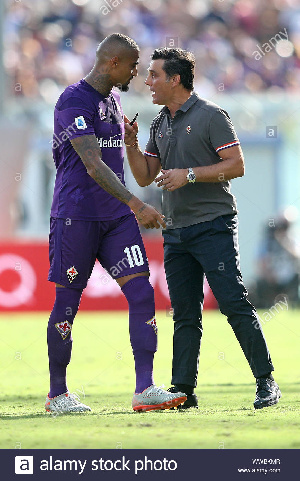 The former Tottenham forward was speaking of his experience at the La Viola after joining them from UD Sassuolo under Montella.

Boateng was handed the iconic number 10 shirt at the Florence-based side in a bid to revive the club’s fortunes in the 2019/20 season, and he didn’t disappoint scoring goals during pre-season.

The attacker failed to replicate his pre-season form to the season proper scoring just a goal in 15 games.

He was later sent on loan to Besiktas where he seems to have rediscovered his form in the Turkish league.

Boateng revealed in an interview with Skyy Italia how fell out with Vincenzo Montella affected his performance at the club.

"It never took off, it happens in football. In my opinion, we did not understand each other."

"Over the years he has changed his game a little, his idea," he added.

Boateng currently plays for Serie B side, AC Monza.