Mahama must apologise to EC, Ghanaians for opposing voters registration 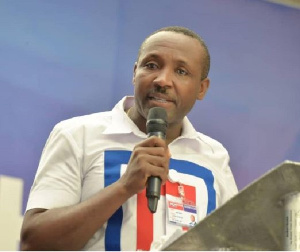 John Boadu is General Secretary of the NPP

The New Patriotic Party (NPP) is calling on John Dramani Mahama to go a step further after conceding that the voters registration was successful and apologise to Ghanaians and the Electoral Commission.

Addressing the media on Monday, August 10, 2020, on the NPP's position on the just ended registration exercise, the party's General Secretary, John Boadu, said John Mahama and the NDC were disingenuous in their attacks against the process to compile a new electoral roll.

"We in the NPP expect him to go further to apologise to this nation for the dangerous ethnic sentiments he raised, jeopardising the security of the state with unwarranted attacks," John Boadu told the media at the press briefing at the Swiss Spirit Hotel in Accra.

Despite initially mounting a strong resistance to the process to compile new voters register for the upcoming December polls, the flagbearer of the opposition NDC, John Dramani Mahama, admitted that the exercise was successful.

“I think the exercise met our expectations… [Over 16 million registrants] is within the range that one would have expected,” the National Democratic Congress presidential candidate said Sunday, August 9, 2020, in an interview.

The Facebook Live interview in Kete Krachi in the Krachi West District of the Oti Region was part of activities on his tour of the region on Sunday.

Explaining why he joined the NDC to put up a resistance against the Electoral Commission’s decision to compile a new electoral roll for the December elections, he said usually before a new register is compiled, it is preceded by a national population census which gives an accurate date of the target population.

John Mahama also said that despite the high turnout during the exercise, the new register has largely succeeded in taking out the names of dead people that existed in the old register.

However, addressing the issue at the press briefing the NPP General Secretary said the exercise achieved more than that, noting that the new register has cut down on the presence of ineligible voters by at least three million.

According to John Boadu, had the EC not compiled a new register, the names in Ghana's electoral roll would have been over 20 million.

Khedira will terminate his contract with Juve next week. The club may sell Douglas Costa
Koloskov about Rostov's departure from the Europa League: Maccabi was playing football, and our guys were shooting somewhere, some chaos
Thomas Muller: As expected, Sevilla was a tough opponent
Javi Martinez on the winning goal in the UEFA super Cup match: It was like in 2013, when I also scored
Hans-Dieter flick: Bayern players had to overcome the pain threshold to beat Sevilla
Julen Lopetegui: Neuer is an incredible goalscorer. Sevilla didn't use their chances
You should see Goretzky's goal again. Muller's goal and levandowski's discount - the magic of mutual understanding 🤝
Source https://www.ghanaweb.com/GhanaHomePage/NewsArchive/Mahama-must-apologise-to-EC-Ghanaians-for-opposing-voters-registration-1030390

Police Officer, 2 Others Remanded Over Murder Of Cabbie

Stop calling me over EC issues — Franklin Cudjoe to journalists

#BBNaija: “I distanced myself from you because I didn’t like your game, I apologize for judging you wrongly” – Dorathy to Nengi

UPP NEC Sues Founder — 'Odike Is Not Our Flagbearer'

2020/21 Division One League to start in December

GNAT Pushes For 'One Laptop, One Internet Modem' For Teachers

Okada riders detail how they ensure the safety of passengers

Siblings in weekend accident in Yilo Krobo laid to rest

‘Love Can Make Us Do Things We Wouldn’t Normally Do’

Election 2020: There can only be a winner or loser; let peace reign! - Opanyin Agyekum to political parties

‘Thanks To Banky W For Changing My Life’

#BBNaija: Neo, Vee, Laycon, Nengi & Dorathy awarded N1million each for their performance in the Lipton Ice Tea and Peace task

‘A punctual society is key to achieving socio-economic growth’

Emirates to resume flights to Zimbabwe on Oct. 1

Shut Up If You Have Nothing To Say – Bernard Aduse