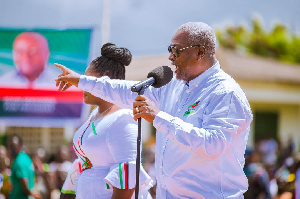 The flagbearer of the National Democracy Congress (NDC), John Dramani Mahama, has promised to cut off tuition fees to fifty per cent (50%) for tertiary students in the 2020/2021 academic year if elected president.

Mr. Mahama said this during an interview in Takoradi, as part of his campaign tour of the Western Region.

According to him, this has become necessary because of the impact COVID-19 and the response to challenges many parents and self- parenting students are facing.

“Dislocation in the economy caused by mismanagement of this current administration and worsen by the COVID-19 pandemic has prompted our attention to give relief to parents and students by absorbing 50% of what they would have to pay when re-elected into power,” he pledged.

Touching on the Public Universities Bill (PUB), Mr. Mahama said the suspension of the bill is not enough, instead, Government should withdraw the bill completely.

“Unless they want to say that they [New Patriotic Party] are waiting to win the presidential seat again before the finally pass the bill,” Mr Mahama added.

He also questioned, if teaching and learning is moving on smoothly, why should there be interference by the government.

Mr. Mahama noted that universities are places of learning which should be devoid of political interference.

About the Public Universities Bill

The Public Universities Bill seeks to harmonise the finances, administration and governance structure of all public universities.

The Bill, when passed, will give the government power to appoint a majority of members of the University Council.

The Council would also have the power to appoint and fire public university officials.

The Bill would also give the President power to dissolve the University Council which will now have the power to appoint a chancellor.

It would also give effect to the University Council to control the finances of the university and determine the allocation of funds.

In the bill is a proposal to rename four public universities after various personalities.

Bayern won their 16th consecutive European Cup match and repeated Atletico's record
Atalanta scored 2 goals for Liverpool in 4 minutes. The Reds missed out for the first time in this Champions League
Mike Tyson: Maradona was my hero and friend. We were compared. I will miss him
Lewandowski scored his 71st goal in the Champions League and shares third place with Raul. Ahead-Ronaldo and Messi
Vidal was removed for arguing with the referee in the game with Real Madrid. He received two yellow cards in a minute
Koke first played 100 games for Atletico in European competitions
Pep on Maradona: Saw the banner: it doesn't matter what you did with your life. It is important that made for our
Source https://www.ghanaweb.com/GhanaHomePage/politics/Mahama-promises-50-reduction-in-tuition-fees-for-tertiary-students-next-year-1091920

Bawumia to speak on future of Ghana’s economy on Thursday