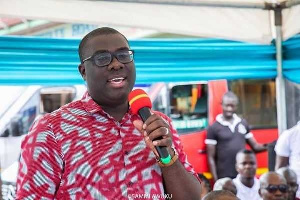 The governing New Patriotic Party has described as “dishonest” and “a big lie”, former President John Dramani Mahama’s recent comments that he will not scrap free SHS but only improve it should he win the 2020 polls.

At a press conference on Thursday, 13 August 2020, the National Organiser of the NPP, Sammi Awuku asked: “Candidate Mahama, why now?”

“You were in power as Vice-President and Head of the Economic Management Team for almost four years, and then as President for four years and some change. In total, you were in power for eight good years. Yet, Candidate Mahama, you failed to implement free SHS! Your endorsement of Free SHS is, therefore, from your own record, not honest. A big lie!”

He said: “We are told by the NDC now, that it was not up to the Education Minister Naana Jane Opoku-Agyemang to introduce free SHS and that it was a cabinet decision not to do so. Well, Candidate Mahama, you were the President. It was your cabinet. You were in charge. Yet, you failed to implement free SHS.

“And now, over 1.2 million young people, mostly from underprivileged homes, have had secondary education. 400,000 of them who met the qualifying mark would still have been left out if it were not for the introduction of the innovative Double-Track which Mahama opposed.

“So having seen that it is doable, John Mahama now says that if he’s elected, he’ll implement Free SHS. Anokwa! Should Ghanaians replace the man who dreamed it, believed in it and delivered it for one who never believed it and fought it?” he asked.

“Once again, Candidate Mahama wants to associate with success but he doesn’t know how to solve problems to achieve success. He has no blueprint for achieving success. Between the two main candidates, it is obvious which one truly cares for the youth of Ghana and, therefore, the country’s future? It is Akufo-Addo”.

Lyon is ready to lower the price of Depay. Now the club demands 25 million euros from Barca
The Oxford bus was blocked for 6 hours due to antiseptic. I had to take a taxi to the match
Alonso went on the bus at half-time against West Brom. Lampard was angry as ever
Zidane on Hazard: It's ready. He has long been concerned about a serious problem, but now everything is fine
Ex-Atletico midfielder Futre on Felix and Fati: I will choose joau. He is special and will soon compete for the Golden ball
Miranchuk will return to the General group of Atalanta after a break for national team matches
Alonso went on the bus after being replaced and was scolded by Lampard. So the coach has never been infuriated
Source https://www.ghanaweb.com/GhanaHomePage/NewsArchive/Mahama-s-free-SHS-endorsement-dishonest-big-lie-NPP-1033378

Ghanaians have waited too long for you – Chief to Naana Jane

Secessionist attack: All 31 of my clients not members of separatist group – Lawyer

Illicit money flows from Africa near US$89 billion - UN study

Nobody can claim a part of Ghana – Mahama chides secessionists

Divorced wives must receive half of husband’s properties – CHRAJ Boss

Secessionist attack: STC cancels all trips from Ho to Accra

Western Togoland: Government not sleeping on the job - MP