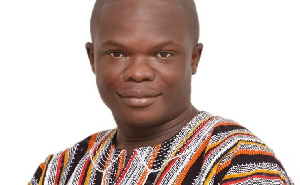 The Deputy Ashanti Regional Communications Director for the opposition National Democratic Congress, Kwaku Asafo Agyei has described the President, Nana Addo Dankwa Akufo-Addo as being unfaithful to God for failing to honour his pledge to build a National Cathedral in the run-up the 2016 elections.

“I can tell you emphatically that President Akufo-Addo has no credibility, he persuaded God after pledging to built a Cathedral for the Nation but has failed to do so in the four years period as president,” he noted.

The NDC stalwart who was speaking on a Kumasi based OTEC FM on Wednesday, September 16, 2020, said President Akufo-Addo has failed to deliver the end of his bargain after promising to build a National Cathedral for God.

President Nana Akufo-Addo has earlier confirmed that he promised God a National Cathedral before he became president, and will redeem that pledge.

Launching the National Cathedral Fundraising Campaign on Friday, 28 December 2018 at the forecourt of the State House, Accra, President Akufo-Addo said just as pertained to Solomon’s dedication of the first temple to God as taught by the Bible, he knows that God cannot be contained in a physical edifice.

“Rather, and again like Solomon on that occasion, the building of the National Cathedral is to serve as a gesture of thanksgiving to God for his blessings, favour, grace and mercies on our nation, and to give me an opportunity to redeem a pledge I made to Him before I became President,” he said.

He stated that “President Akufo-Addo when he was campaigning for our votes in 2016 sat on our benches to eat kenkey with us. He sat in our shops to talk to us without bringing his own chair but today, even when he goes to a private wedding or funeral, he carries his chair around. Have you asked yourself who bears that cost?"

But Mr. Asafo Agyei quizzed “aside he having nothing to show for with his excessive borrowing, he has taken it upon himself to leave huge financial debt before he leaves office. This is what we are against. He and Ex-President Mahama who has must be trusted”? Someone who has blatantly deceived Lord God Almighty with fake promise and JDM who has credibility?

“It is needless for him to be carrying his chair around in a dedicated van. If you could come to our shops and eat kenkey with us on our benches, what is the rationale behind you fueling a van and locomoting your chair around?".

The NDC communicator further said Ghana cannot risk trusting a man who can trick God without warning, adding that President Akufo-Addo will delude the country again if retained in power.

The 37-year-old Ribery is at the top of Serie A in pressing, dribbling, speed and assists. And educates young and thinking about becoming a coach
Real Madrid want to resolve the issue of Ramos' contract as soon as possible
Leonardo spoke with Mbappe's representatives about the contract extension. The player wants to know how the club will develop
Salzburg coach Marsh: Atletico are no different from Lokomotiv in their style of play. The difference in the level of players
Bartomeu and his Directors can resign tomorrow if the vote of no confidence is not postponed
Luka Modric: would Exchange the Golden ball for Croatia winning the world Cup
We've taken apart Bale's Golf skills with the pros. It seems that Gareth trains 15 hours a week
Source https://www.ghanaweb.com/GhanaHomePage/NewsArchive/National-Cathedral-Don-t-vote-for-unfaithful-Akufo-Addo-he-deceived-God-Asafo-Agyei-1063042

Govt will use soldiers to intimidate people of Volta, others on Dec. 7 – Nigel Gaisie

Obinim is back; a woman carries him at her back to get healed of waist pains

Today in History: I will make Mahama a 'serial loser' - Wontumi

Election 2020: Let politicians use their own children to fight - Prof Gyampo to the youth

Hajia Bintu does it again, drops another set of photos showing the rare size of her “property” » ™

Chairman Wontumi in trouble over ‘unhealthy comments’ on Mahama’s daughter

EC should have prosecuted disqualified Presidential aspirants in 2016 – Ben Ephson

Adina opens up about ‘Araba’ at album listening

Offset thanks fans after being detained by police

Vote No.1 if you’ve benefited from any of Akufo-Addo’s programs – Oppong Nkrumah

NPP’s only claim to fame is free SHS - Mahama lashes

Election 2020: Akufo-Addo appeals to electorate to vote for him based on his performance

Flawed elections are not possible under current system – EC

Umahi blows hot, says ‘I will not rebuild destroyed properties built in my tenure’

After implementing free SHS, Akufo-Addo can achieve anything – Adeiso Chief

Only 3% of Ghanaian businesses fear collapse over pandemic -Survey

We demanded justice for George Floyd but not for Prof Benneh, others - Prophet Oduro

How can you lie about Akufo-Addo's promise to build 350 new SHSs? - Apaak asks Napo

Who is the greatest Ghanaian football player to play in the Premier League?