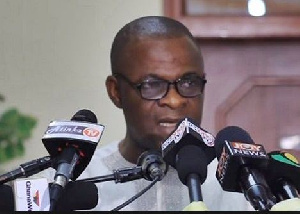 A retired Police officer, COP Bright Oduro has said it is not the mandate of National Security operatives to arrest offenders no matter the crime.

“All these internal security issues is the work of police officers so if someone is not adhering to law and must be dealt with, it is the Police's duty.

“The duty to arrest has always been with the security services such as the military, police, customs, fire service and immigration etc and they have to do whatever falls within their mandate,” he noted.

This follows recent reports of the Ashanti Regional Security Coordinator, DCOP Ayensu Opare Addo (rtd), being assaulted by some alleged members of the vigilante group affiliated to the New Patriotic Party (NPP)- Delta Force who, according to the security capo, are now part of the National Security apparatus, attempted to forcefully throw him out of his office.

The operatives claimed that his appointment had been terminated.

COP Bright Oduro (rtd) further questioned the qualification of the National Security operatives and what competencies they have to effect arrests.

He, therefore, described their actions as unprofessional.

According to him, if an offense is identified by National Security operatives, the right thing to do is to hand the culprits to the police.

“In my over 30-year career as a police officer until my retirement, I never heard or saw that National Security Operatives arrest anyone. If someone has committed a punishable offence, the Police is there to handle it,” he stated.