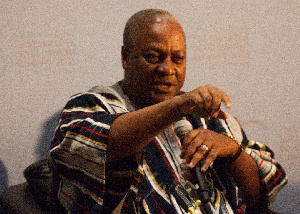 Flagbearer of the National Democratic Congress (NDC), John Dramani Mahama has reiterated the party’s position that they had the majority of seats in parliament.

He accused some officials of the Electoral Commission (EC) of twisting the parliamentary election results to favour the governing New Patriotic Party (NPP).

He made this allegation in his address to the nation after the Supreme Court dismissed his petition to challenge the results of the presidential election.

He said,"In the parliamentary elections, clearly, the NDC won the majority of seats. However, through devious manipulations and connivance by officials of the Electoral Commission, a number of these seats were illegal declared for the NPP. In some instances, the manipulation was so glaring and clear that a simple intervention by the leadership of the Electoral Commission, as has been done by previous Commissioners, could have addressed the issues and righted the wrongs in order to make court actions completely unnecessary."

On Tuesday, December 8, 2020, John Dramani Mahama said the NDC’s analysis of the results show that his party has won the majority of seats in Parliament.

In a press conference, the NDC flagbearer said, “We thank the electorate for giving us a working majority in parliament; 140 seats in Parliament, which is a majority and no attempt should be made to subvert that.

“I’ve looked at the results we’ve collated so far and I’m excited, I’m happy with the results. We won in 10 regions out of 16 and the Ghanaian people have expressed confidence in us,” Mr. Mahama said.

Contrast before the whistle in Prague: Slavia players lined up in front of a kneeling Arsenal
Unai Emery: I am used to matches against my former clubs, so the games with Arsenal are not something new
I drink beer, champagne, red wine. I eat cheese and caviar. Figo about watching football
Figo about Messi and Ronaldo: Truffles with caviar is difficult to compare
Pogba on the substitution at half-time: They tried to provoke me for the 2nd yellow card. The coach decided that it would be better if I left the field before the red
Ole Gunnar Solskjaer: Manchester United are in for a real European battle with Roma. We are good against the Italians
Mikel Arteta: An important victory at a crucial moment, but it will be difficult for Arsenal. Emery is the most successful coach in the history of the Europa League

Farmer arrested for attempting to break jail in Akumanda

‘Ahenkwaa’ remanded into custody for fraud

After Two Failed Marriages, I’ve Decided To Give My Life To Christ

Dr. Akoto Osei’s wife to be buried on Saturday

Public advised to opt for ADR in dispute resolution

AGAMal to protect 84,984 residents in Builsa land from malaria

Ahafo youth to demonstrate against Newmont if ...

Stay away from insulting Razak Opoku

A suspect in Takoradi robbery and murder case gun down

VIDEO: Only Illiterates And Blockheads Are Fighting For The Release Of An Abusive Mother Who Deserves To Go To Jail

Momo is the fastest means, but banks are the safest

Your guns don’t scare us; we're ready to die for our land – La Youth to soldiers

UHAS engineers its academic programmes for ingenuity and service

Great Olympics vs Asante Kotoko is the title decider

Farmer nabbed for attempting to break jail in Akumanda

COMOG wants government to weed out unscrupulous individuals in society

Great Olympics vs Asante Kotoko is the title decider - Opeele

Flash Only+ program: Turbocharge your business with NVMe SSD for the Price of SAS SSD

Momo is the fastest means, but banks are the safest - Tema residents

Akuapem Poloo’s case: I don’t want her sent to jail for her folly – Agyenim-Boateng

“If Akuapem Poloo Admitted She Broke The Law, Why Are You People Fighting The Law”-Kwadwo Sheldon Quizzes