NPP resurrects ‘no verification no vote’ stance for 2020 elections 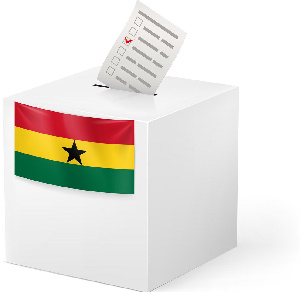 The governing New Patriotic Party (NPP) has said it is confident in the new biometric voter management solution acquired by the Electoral Commission and hence has revived its 2016 "no verification no vote" stance for the December polls.

While in opposition, NPP in the run-up to the 2016 general elections took the position that only voters who are verified biometrically should get to vote, a stance that at the time was informed by claims that the electoral roll was not credible.

Ahead of the December 2020 presidential and parliamentary polls, the NPP said on Monday, August 10, 2020, that it will take the same stance - this time because the party is highly confident in the new system.

Addressing a press conference in Accra on Monday, August 10, 2020, NPP General Secretary, John Boadu, said with the facial recognition facility that is part of the new technology, it would be impossible for listed voters not to be electronically verified by the biometric verification machines.

“As we move on towards the election, we will be having a lot of IPAC [Inter-Party Advisory Committee] meetings and it will be appropriate to push for no verification no vote,” John Boadu said at the press conference.

The NPP General Secretary said the old biometric machines were unable to verify voters properly in 2016, resulting in a high number of manual verification on voting day.

Manual verification, John Boadu argued, was largely unreliable and a potential source of dispute as it tends to comprise the integrity of the elections.

“The new biometric voter management solution which the EC has acquired ahead of the 2020 elections has facial recognition as an additional feature for those whose fingers cannot be verified,” he stressed.

Meanwhile, the EC has revealed that biometric data of 16,663,669 Ghanaians have been captured in the just ended registration exercise.

According to the Deputy Chairman of Corporate Services at the EC, Dr Bossman Asare, the nationwide provisional figures since its last briefing have seen the top four regions maintain their positions.

Speaking at the eighth edition of the ‘Let the Citizen Know’ series on Friday, August 7, Dr Asare said; “As at 6th August 2020, the Commission had registered a total of 16,663,669 nationwide. Since the last briefing, the four top regions have maintained their positions. The Greater Accra region has especially lost some grounds in percentage terms from 21.34 % to 20.8% of the total registered. The Ashanti region also reduced marginally by 0.1% to its current 17.9%.”

The NPP sees these figures as a satisfactory, stating that the electoral roll would have contained more than 3 million ineligible voters had the EC not compiled the register.

Chris Waddle: I Don't see Manchester City Winning the Premier League this season
Lewandowski and Kuizans laughed at rumors of a conflict in training
Kevin-Prince Boateng signed a contract with Monza Berlusconi until the end of the season
Ex-Manchester United player Raphael: van Gaal is one of the worst people I've worked with. I was told that he doesn't like Brazilians
Rebic dislocated his elbow and may miss several Milan matches
Manchester United will work on Sancho's transfer until the transfer window closes
Frank Lampard: Must stand up for the Cap. I'm not going to say that he spent his last game for Chelsea
Source https://www.ghanaweb.com/GhanaHomePage/NewsArchive/NPP-resurrects-no-verification-no-vote-stance-for-2020-elections-1030426

FACT-CHECKED: Americans advised to reconsider travel to Ghana due to coronavirus

Western Togoland: 10 AK47 rifles yet to be retrieved – Oppong Nkrumah

Akufo-Addo has been informed he will lose 2020 elections - Dr. Apaak

They have UN on their side, let's handle this diplomatically - Ernesto Yeboah on Togolanders saga

Come back stronger like Azumah – Coach Asare to Duke Micah

Coalition on RTI lashes at government

“I Don’t Have Anger Management Problems”, Says BBNaija’s Erica As She Reveals Why She Is Seeking Help

Akufo-Addo's COVID Measures So Far Stands Tall Among Other Countries

GCNet Labour Impasse: We Are Unable To Grant Your Request—NLC To Austin Gamey

Why Armenia and Azerbaijan are fighting again

Employment barometer in Germany continues to rise in September: ifo

Two men hack each other to death over woman

Police arrest 2 over missing body of chief at Awutu [Audio]

After Smoking For 20 Years, A Plus Shares Tips On How To Quit

Mass Dog Vaccination Is The Best Way To Eliminate Rabies

South Koreans Kidnapped In Ghana’s Waters Yet To Be Rescued

Agitate For Referendum; Don't Use Militancy – Effah Dartey To Secessionists

Another crash at Sege claims 2 lives

About 1,700 college students in Manchester told to self-isolate after coronavirus outbreak