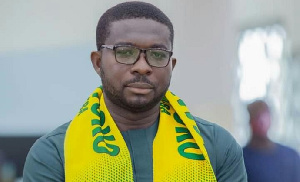 After teasing their supporters with a couple of appointments this week, Kotoko have now released the full list of the men and women who will be serving with Nana Yaw Amponsah as management committee members.

Earlier in the week, Kotoko confirmed the appointment of ace broadcaster Moses Antwi Benefo as communications manager and two others as heads of the club’s legal department.

Today, Friday September 17, 2020, Kotoko have via their twitter handle announced an 8-member team who will assist Nana Yaw Amponsah in various capacities.

The list includes former deputy General Secretary of the GFA, Emmanuel Dasoberi who will be serving as Administrative and Operations Manager and Eric Twum being the new Commercial Manager.

The Finance Manager role is being handled by Thoma Sevordzi with Dentaa Amoateng, Akua Pokuaa Kwarteng, Nilo Effori and David Obeng Nyarko serving in other portfolios.

The announcement is an indication that Nana Yaw Amponsah will stay on as CEO contrary widespread reports.

Nana Yaw Amponsah has been rumoured to be considering retirement after clashing multiple times with some members of the club board.

But there appears to be a change of heart with Nana Yaw now determined to see through his three-year deal with the club.

Already, he is working hard to sign as many as eight players for the club.

There are reports Asamoah Gyan, Justice Blay and Sulley Muntari are high on the list of wanted players for Kotoko.

GhanaWeb can confirm that Kotoko’s initial bid of $20,000 for Blay was turned down by Medeama.

After going silent for more than a month, Kotoko have replied Medeama’s offer and negotiations are back on the table.

Kotoko and Ashgold will be representing Ghana in the Champions League and Confederation Cup respectively.

Carrera about the fight with Livaya: Utter nonsense
Levandovsky has 9 goals after 5 rounds. 14 Bundesliga clubs have scored less than that
Fati is the youngest goalscorer in the Clasico. He broke Raul's 1995 record
Ramos is playing his 31st match against Barca for Real Madrid in La Liga. He repeated the record of Raul and hento
Pep Guardiola: Manchester City lost 7 points - that's a lot. But problems arose for various reasons
Sandro Schwartz: Dynamo played intensely and scored 3 goals. We wanted to be more active in the attack
The tour in Italy started with a cool comeback with 6 goals. But it was difficult to see, because the main star was a dense fog
Source https://www.ghanaweb.com/GhanaHomePage/NewsArchive/Official-Kumasi-Asante-Kotoko-announce-management-team-1063135

Election 2020 is about 'Akufo-Addo and others' - Charles Owusu

Coronavirus: Working from home is here to stay - Michael Kwofie

Stop the insults, filthy language in our politics – Prof. Opoku-Agyemang

#EndSARS: ‘My Older Brother Lost His Life During A Sickle Cell Crisis In Nigeria At The Age Of 10’

Be Circumspect With Discussions On #EndSARS Protest — Dr. Vladimir Antwi-Danso To Media

“You are a disgrace to all women”

Akufo-Addo’s only claim to fame is free SHS – Mahama

Abroad Is Overrated, Nigeria Is The Best -Man Reveals (Video)

Politicians, public servants will serve well if they swear by our ‘African gods’ – Stonebwoy

I didn't think I will leave Anderlecht this season- Jeremy Doku

You're A Covenant Keeping Leader — Ahafo Chiefs To Akufo-Addo

What An Old Man Can See Sitting, A Young Man Can’t See Even If He Climbs Iroko Tree – Festus Keyamo

Mahama takes NDC manifesto to the residents of New Takoradi

Burna Boy Apologizes After Being Called Over Reckless Tweets

Mortuaries not a priority for zongos; they prefer schools – Bawumia

No deal agreed yet for Justice Blay - Kotoko Communications Director

Richard Kingson is the best Ghanaian goalkeeper ever – Sulley Muntari

The 2020 Manifesto’s Foreign Policy positions of NPP and NDC

Election 2020: Kwaku Bonsam fires up for victory in Offinso North