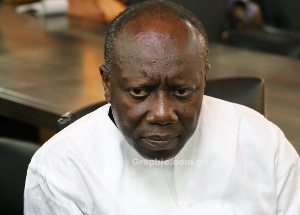 It is another year; in fact, a significant one indeed. In December, the country will be heading to the polls to decide who will be in the driving seat in the next four years. But of much concern to the economy and foreign investors is how the Finance Minister plans to keep spending in check, a task that almost all his predecessors failed to deliver.

In 2004, during the John Kufour administration when Yaw Osafo-Maafo, who is now the Senior Minister, was the Finance Minister, the budget deficit target was set at 1.7percent. However, the 2015 budget statement shows that the deficit missed its target to hit 3.2percent of GDP.

And in 2008— the second term under Mr. Kufour, then Finance Minister, Anthony Akoto Osei set the target at 4 percent. The actual figure recorded, however, in the 2009 budget showed the deficit almost tripled, hitting 11.5 percent of GDP.

Then, in 2012— the Mills-Mahama administration— Finance Minister Kwabena Duffour, also pegged the budget deficit at 6.7 percent of GDP. But at the end of the year, the deficit almost doubled, recording 12 percent.

Lastly, in just the previous election year (2016), under the watch of John Mahama and Finance Minister Seth Terkper, the fiscal deficit target was 5.3 but hit 8.7 percent at the end of the period, according to the 2017 budget. All the above examples indicate clearly the difficulty in keeping spending in check during election years as all Finance Ministers have exceeded their targets above reasonable limits.

What draws so much attention to this particular election year is the fact that there is a new Fiscal Responsibility Act in place which places restrictions on the Finance Minister not to cross a budget deficit line of 5percent of GDP and this is going to be tested for the first time in the history of this country.

What also makes this another great test is the revenue performance under this government. After scrapping many taxes, it referred to as nuisance when the Akufo-Addo administration took office, it has struggled to meet revenue targets.

The 2020 Budget statement shows that total revenue and grants for the first nine months of the year amounted to GH¢36.3 billion (10.5percent of GDP) which represents 13.6 percent shortfall relative to the target of GH¢42 billion (12.1 percent of GDP).

The persistent shortfall in revenue has pushed government to increase borrowing, especially from external sources, to finance its many projects, thereby, putting the economy in list of countries regarded by the IMF as having a high risk of debt distress.

Again, another situation that has even worsened the matter is the Free SHS programme which guzzles a lot of government revenue from oil resource, leaving little for the other sectors. For example, the 2019 annual petroleum report shows that of the GH¢987million utilised under the Annual Budget Funding Amount (ABFA) for the first nine months of the year, GH¢570 million, representing 57.9 per cent, was spent on the Physical Infrastructure and Service Delivery in Education.

It is noteworthy, though, to know that Ken Ofori-Atta, like all his predecessors, has promised to live within his means in the coming election and has vowed not to derail the gains the economy has made so far.

“Economic management under the Fourth Republic has tended to follow a pattern of political business cycle where election years have been characterised by fiscal indiscipline. We have witnessed various governments spending excessively to finance off-budget expenditures that led to major fiscal slippages.

Therefore, the decision of the President to impose on himself, a binding legislative constraint, with accompanying sanctions for me as the Finance Minister, I believe this is a clear manifestation of our commitment to fiscal discipline. We pledge to Ghanaians that we will not derail this economy that we have worked so hard to fix,” he said.

Whether this promise would be kept is just a matter of time. For now, it is important to remind Mr. Ofori-Atta that a huge test awaits him; and he passing it will go down in history as the first ever Finance Minister to achieve his deficit target, especially, under the Fiscal responsibility Law.

I Have Lost Any Symptom Of Respect For You: Yung6ix Tells M.I

Black Cedi Stood For The Truth And Left Stonebwoy’s Label With Me; He’s Now My Manager

I Believe Castro Will Come Back – Funny Face |

WHO experts to decide whether new coronavirus is an international emergency

A Woman Who Doesn’t Like Money Is Not An Asset: Reno Omokri

Rawlings never flew an aircraft under the Adomi Bridge

Ghanaians advised to see elections as a developmental decision

5 Cops Interdicted Over Assaulting Driver In Ya Na’s Palace

Why Lagos Is A Suffering City, NOT Mega City: Ayo Shogunro

Timing for new register will not favour fishermen

EPL: What Rio Ferdinand said about Maguire after Man United’s 2-0 defeat to Burnley

Sister Afia Opens Up On Why She Ditched Shatta Wale

FLASHBACK: How CK Akonnor’s Hearts of Oak lost to Maxwell Konadu’s Kotoko in 2012

Lady Travels 18Hrs To Visit Boyfriend, Only To Meet His Real Girlfriend At His House

All set to distribute ambulances on January 28 – Health Minister

Chartered Institute of Bankers Act to be operational by June

Humble yourselves for mentorship – Lecturer

There Is Good Money In Production Only If You Continue To Go In Hard As A Producer- M.O.G Beatz

Japan branch of NPP appeal for retention of NPP

No New Gains for Ghana In Corruption Fight

Kotoko and Hearts games are the easiest in the league

What you need to know for your own security

5 Cops Interdicted Over Assault In Ya Na’s Palace