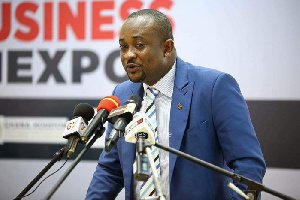 The promise to legalise Okada by the NDC has been well received by the Okada Riders Association but has received backlash from the NPP with vice-president Dr Bawumia saying the NPP government will provide cars for Ghanaians through car assembling companies in the country, instead of legalizing what he calls dangerous Okada business.

Also, the Deputy Information Minister, Pius Enam Hadzide, has referred to the NDC as backward-looking in the legalization of the transport service.

According to him, the service which originated from Nigeria has been banned in the country, whereas the NDC wants to adopt it.

Speaking to Francis Abban on the Morning Starr he said “I’ve been told that okada is a Nigerian word. Do you know when you go to several states in Nigeria, they have banned Okada and you want to go for it? For a lack of a better word, is the NDC not backward-looking?”

“The very people who created the whole concept of Okada, they are even running away from it and you are going back to it.”

He went on, “if you wanted to set standards for yourself, you do not look backward, you look forward. Instead of a multi-modal transport system involving good road, involving rail transportation, involving advanced intra-city transportation, that is why we are reinvesting in Metro Mass, they came and collapsed Metro Mass.”

Agent Lukaku: Romelu is the best striker in the world at the moment
Marcus Rashford is the pride of all England, from the Queen to Jurgen Klopp. He again fed children across the country - and received the Order
Pjanic-Habibu: Good luck, brother. Inshallah, we will win
Klopp on Rashford's charity: I hope mom is proud of him. I'm proud
Troy deeney: I was called a black asshole, and social media said it wasn't racist. Do companies even want to change this?
Miralem Pjanic: Sorry didn't trust the players at Juventus. It's a shame when people are judged incorrectly
Wenger on why he didn't mention Mourinho in the book: he Didn't want to talk about Jose, Klopp or Pepe because they are still working
Source https://www.ghanaweb.com/GhanaHomePage/NewsArchive/Okada-debate-NDC-is-backward-looking-Pius-Hadzide-1063171

Mahama takes NDC manifesto to the residents of New Takoradi

Burna Boy Apologizes After Being Called Over Reckless Tweets

No deal agreed yet for Justice Blay - Kotoko Communications Director

Richard Kingson is the best Ghanaian goalkeeper ever – Sulley Muntari

The 2020 Manifesto’s Foreign Policy positions of NPP and NDC

Election 2020: Kwaku Bonsam fires up for victory in Offinso North

Bring down Lekki Toll Gate permanently and build a statue for every one killed that night: Health Commissioner

Guardiola continues to back Aguero over female linesman incident

Foreign Direct Investment inflow rebounds as Ghana records $785.62m in 1st half of 2020

‘You Are A Dictator, Sociopathic Disgrace’ – Fani-Kayode Attacks Buhari

Wendy Shay Calls For The Wrath Of Ghanaians With Her Latest Post; Claims They Fear Her

Sanwo-Olu Releases Names Of Police Officers Under Prosecution In Lagos

We Are Coming To Share Your Husbands With You

‘Salma Mumin is A Liar, She Should Apologise To Us Or Get Sued’- MTN Bares Teeth On Ghanaian Actress » ™

Diana Hamilton reveals how ‘shaba’ dress shamed her on stage

Omotola Apologizes For Her Insensitive Tweet About The Lekki Tollgate Shooting