Recruitment under Akufo-Addo govt not based on merit – Mahama 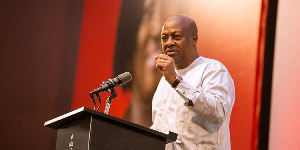 The flagbearer of the National Democratic Congress (NDC), John Dramani Mahama, has reiterated his pledge to pay assembly members when he is elected as the next president in the December elections.

Mr Mahama says the endless duties of assembly members, particularly as the first point of contact in most communities, require that they are financially supported to enable them perform those tasks.

Speaking at a meeting with the Civil and Local Government Staff Association, Ghana (CLOSAG) in Accra on Thursday, Mr Mahama allayed the fears of sceptics, saying it is possible to remunerate assembly members by cutting down the size of centralized government, reducing the number of ministers and the privileges they enjoy and channeling those resources to assembly members.

He observed that the progress made in decentralisation has been rolled back in the last three and half years, following the government’s bastardisation of both the civil service and local government service.

He said the government has assisted in the hijacking of the work of the civil and local government service by political assistants, adding that recruitment and promotion is no longer based on merit as a result of interference from government.

Mr Mahama said he is committed to the local government process, adding “it is only through decentralisation that we can see true progress in the country”.

What kind of goalkeeper did Chelsea take? Edouard Mendy was out of work 6 years ago, impressed the Czech and will replace Kepu
Solskjaer on Manchester United signing only van de Beek: You show disrespect to Donny, he's a top player
Milan want to sign striker Bude-Glimt Hauge. He scored them in the Europa League on Thursday
Rivaldo: Barcelona will not be easy without Suarez's goals
Munir from Seville was forced by FIFA to rewrite the rules. Now players can change the national team
Lampard will talk to Kepa and Caballero after signing Mendy
Ralf Rangnick: Havertz - Cruyff of the present day. I don't see any weaknesses in his game
Source https://www.ghanaweb.com/GhanaHomePage/NewsArchive/Recruitment-under-Akufo-Addo-govt-not-based-on-merit-Mahama-1033525

I’m happy they stole from you – DKB mocks Starboy Kwarteng

#BBNaija: Nengi is the most likely housemate to walk unclad on Third Mainland Bridge for a N50million reward — Wathoni

Govt to commission hospital at Tepa

Fayemi Reacts To His ‘Suspension’ Says, ‘It’s A Joke Taken Too Far’

Mariah Carey claims sister tried to ‘sell her out’ at 12

Mark Okraku Mantey Thanks Sarkodie For The £500 He Gave Him

Any amount of alcohol use during pregnancy harmful to child’s brain: Aussie research

Kenya set to host test run ahead of Continental Tour

Federation Of Muslim Council Back Mahama's Special Mortuaries For Zongos

Tain People Are So Grateful For Your Free SHS, It Will Help Change The Socio Economic Structure Of Our District — Chiefs

‘None Of My Ex Have Been Able To Replace Me‘

I have a special bond with the players - C.K Akonnor

Justin Bieber and Chance the Rapper give cash to fans

South Africa about to reopen, but not to everyone

‘Thanks For This Monster Song’

We have not abandoned ‘E Blocks’- GETFund replies NDC