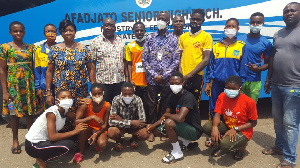 The deal was brokered by the Chief Sports Development Officer and Regional Sports Director of the Authority, Mr Kwame Amponfi Jnr, through one of his aggressive sponsorship initiatives. The offer will see Mr Ayivor providing financial and material support for the effective preparation and participation of Team Volta in future National Cross- Country competitions.

Mr Ayivor, popularly known as Afe Lotto, while presenting the first sponsorship package of six thousand Ghana cedis (Gh?6,000.00) to the team at his office in Ho last Thursday said, “I think the Regional Sports Director; Mr Amponfi Jnr. and his coaches mean well for our region and all resourceful citizens of the land must support them to adequately prepare this newly-composed team to effectively represent our region for excellence”. He encouraged Mr Amponfi Jnr and his team to sustain their sacrificial work for the region, adding that posterity would be kind to them.

It would be recalled that the Volta Cross-Country team at its first appearance in the maiden edition of the national competition held at Mpohor in 2019 placed 4th and subsequently improved to place 3rd among sixteen (16) regions after an excellent performance in the 2020 edition held at Ajumako in the Central Region of Ghana.

However, soon after that impressive performance, the team lost most of its leading male and female athletes to occupational and educational transfers from the Volta Region, leading to the reconstitution of a new-look team for the 2021 National Cross-Country held recently at Sefwi Wiawso in the Western-North Region. Kwaotse Philip from Central Tongu in the Volta Region finished among the top ten (10) national athletes out of the over ninety (90) participating athletes.

Mr. Ayivor, who is a personal friend of Mr Amponfi Jnr, had on previous occasions supported the Sports Authority with four (4) Brand New Lorry Tyres, a Computer, Printer and the General Maintenance of the official vehicle of the Directorate.

In another development, Ms Enyonam Afi Amafuga, the Volta Regional Director of Education, has assured the Authority of a regular release of a road-worthy bus for Team Volta in future National Sports Competitions, once it could be fuelled.

On behalf of Team Volta, the Director-General, Management and Staff of the Sports Authority, Mr Kwame Amponfi Jnr thanked Mr Ayivor for his timely intervention upon the request for support by the Authority and assured him of the efficient and progressive utilisation of the sponsorship package to justify his investment in the team.

Lillian Thuram: I laugh when Pirlo is criticized. You can't expect results from a coach with 15 years of experience
Bailly could leave Manchester United after refusing to renew his contract. He is unhappy with playing time
Pep Guardiola: City will reach the semi-finals if they don't make mistakes like they did with Lyon
Kane wants to move to Manchester United or Man City. PSG - option in case Levy turns down clubs from England
Ronaldo may leave Juventus if the club does not qualify for the Champions League
Diakabi on the racist scandal: The story is not over. I want Kala to be punished
Agent Hakimi: If Inter were still playing in the Champions League, they would have gone all the way to the end. He is good