There was a bit of ‘drama’ in the studios of Metro TV, during the Good Morning Ghana show.

The guests for the show were Kwesi Pratt, managing director for the Insight Newspaper and the MP for Bortianor-Ngleshie-Amanfro constituency, Honorable Sylvester Tetteh.

The two political activists were in the studio to speak about various trending political and economic stories the cedi deprecation and the recent downgrade of the country to CCC and CCC+ by some institutions.

In the course of their arguments, Kwesi Pratt alleged that his colleague, Sylvester is in the studio with a whole “army”. This statement from Kwesi Pratt wasn’t clear to the host of the show, Randy Abbey and he urged Kwesi Pratt to explain.

Kwesi Pratt revealed that Honourable Sylvester Tetteh is chatting with some communicators to give him more points to make his arguments in the studios against him.

“In actual fact, while Sylvester is sitting here, he is an Army. A whole army which is sitting here. Can’t you see what is happening. His phone is on, there is a communication team somewhere helping him” he said.

Sylvester Tetteh replied to this allegation and revealed that he is not chatting with any communication team but he is rather dealing with matters from his constituency.

“I am dealing with matters from my constituency from my phone” he explained. 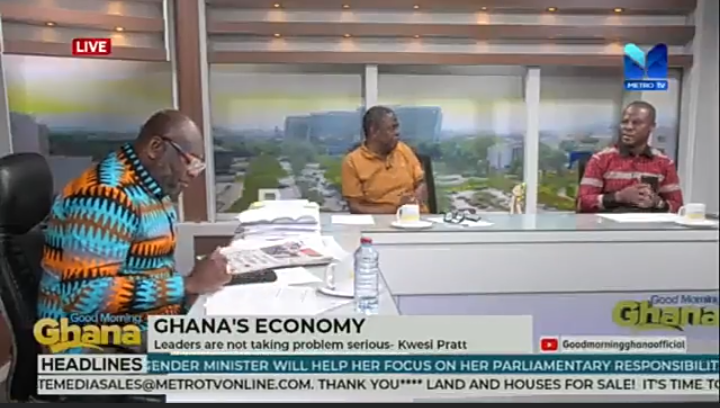 The show continued after this short “drama” and both parties continued with their arguments. Kwesi Pratt revealed that this NPP administration has proved to be the worst government in the history of Ghana. Sylvester Tetteh, who happens to be a member of the NPP revealed that it is never true that this administration is the worst in Ghana’s history. He argued that it is the even the eighth strongest economy in West Africa.

Do you agree with Sylvester Tetteh or Kwesi Pratt on their various arguments? Tell us your opinion by commenting below.