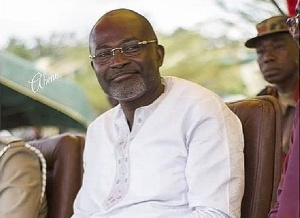 Lawmaker and maverick politician Kennedy Agyapong says there are no witches in the world.

According to him, people should take responsibility for their failure and stop blaming witches because they do not exist.

Kennedy Agyapong believes that hard work should always be the hallmark of every individual who wants to succeed in life rather than being dependent on a Pastor.

“There is no witch anywhere; when you fail in life and you attribute it to your mother, father but when you were smoking jar, was your grandmother there. When you were stealing from your boss, were they there,” he said.

Adding that “If there were witches, I would have been dead by now because I run my mouth”.

To the Assin Central Member of Parliament, he believes in the Superior being although he does not trust some Pastors and their antics and therefore ask that people build their trust in him and he will not fail them.

“When I go to bed I don’t know where my spirit goes but I know there’s a superior being and he is God, who will not make anyone toil in vain.”

Sassuolo is ready to give Locatelli to Juve on loan for 5 million euros with an obligation to buy out at least 30 million
Sofia Pozdnyakova: It's more fun with the audience, the excitement wakes up. But we do not have such a popular sport as football or figure skating. We are used to it
Gilmore is the future of Chelsea. There is an elite pass, speed, and experience will gain in Norwich
Bologna signed Arnautovich. The forward of the Austrian national team was Interesting to Dynamo
Inter may sign Pjanic to replace Brozovic. Marotta was in contact with the Barca midfielder
Shevchenko urged Yaremchuk to move to Benfica at the request of Rui Costa
Barcelona can sign the striker of the Spanish Olympic team of the World in the event of the departure of Braithwaite and Manay

If i die today, I die a hero – Ayisha Modi shares ‘solemn’ post on social media

Iwan’s curses have backfired, he is seriously struggling in life now – Bulldog reveals

Shatta Michy Wants To Kick Out Majesty For Kicking Her Every Night, Quizzes The Age She Can Throw Him Out » ™

Despite paying my bride price, I’m no longer with my baby daddy – Hajia 4real

Mona Keeps fit with the Ghana union of DJs(+PHOTOS)

Abena Korkor Reveals One Thing She Loves To Do

Berla Mundi Reacts As She Gets Nominated For Top Award

Ghanaians are fed up with Sarkodie’s one way style of rap, he’ll lose his crown – Ziega » ™

Use confiscated rosewood for furniture not National Cathedral

Use confiscated rosewood for furniture not National Cathedral - Clement Apaak

Election 2024: NDC will remain in opposition if they market Mahama as their flagbearer

Let us invest in agribusiness and agriculture logistics

Akufo-Addo laments how Africa is treated in trade partnerships

I will be happy to play for Hearts of Oak

Over 93 percent of Ghana’s imports insured by foreign companies

RTU are in GPL to stay

Election 2024: NDC will remain in opposition if they market Mahama as their flagbearer - NPPYO