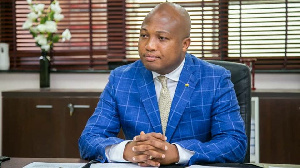 The Member of Parliament for the North Tongu Constituency in the Volta Region, Samuel Okudzeto Ablakwa, has condemned National Security operatives for besieging the premises of Citi FM/Citi TV in a bid to arrest a journalist, Zoe Abu-Baidoo, after arresting her colleague, Caleb Kudah.

Mr. Ablakwa insists the move by the security agency is outmoded and must be condemned by all well-meaning Ghanaians.

According to him, this has “not only exposed the growing intolerance, dwindling respect for human rights and want on abuse of power by government officials; it has also brought to the fore the lack of sophistication and the continuous preference for ‘buga buga’ outmoded security tactics.”

He, therefore, charged the security agency to find innovative ways to “remotely block, hack, impede or prevent any information considered injurious to national security from being circulated in the cyberspace.”

Mr. Ablakwa also said recent actions of the National Security have exposed challenges within the country’s security apparatus to the world.

“National security should stop embarrassing us to the international community and even more worrying, they must stop exposing their pathetic cybersecurity vulnerabilities to criminals and potential enemies of Ghana — for as the experts have warned, the next frontier of war is cyberwarfare.”

The opposition National Democratic Congress (NDC) has also described the incident as “unlawful and preposterous”.

According to the party, it won’t allow the said acts to continue.

“The NDC condemns in no uncertain terms, the arrest of Caleb Kudah and the Gestapo invasion of the office of Citi FM by armed National Security operatives.”

About the raid and arrest

A team of seven heavily-armed police officers besieged the premises of Citi FM and Citi TV in an attempt to arrest one of the station’s journalists, Zoe Abu-Baidoo.

Zoe was targeted in the raid after the police accused her of electronically receiving some video files from her colleague, Caleb Kudah.

Mr. Kudah, also a broadcast journalist and Host of BackPage on Citi TV, had been accused of filming some abandoned cars at the Ministry of National Security, a supposed restricted security zone on Tuesday, and had sent the videos to Zoe via WhatsApp.

However, both Mr. kudah and Zoe Abu-Baidoo were released later in the day on Tuesday.