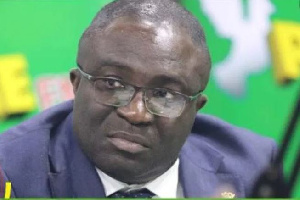 Member of Parliament for Subin Constituency, Eugene Boakye Antwi and Ashanti Regional Chairman of the New Patriotic Party (NPP) Bernard Antwi Boasiako and other party executives have been summoned by a Kumasi High Court to respond to contempt charges relating to the recently held Constituency primary on Monday, August 17, 2020.

Eugene Boakye and the rest of the executives, according to report, were instrumental in organizing the Subin primary in clear violation of the orders of the court.

In that controversial election, Eugene Boakye Antwi romped home with more than 70 per cent of the total valid votes cast to beat his only contender, Joseph Boakye Danquah who pulled out of the election due to the pending court case.

Reports suggest since bailiffs were having a tough time serving the motion of notice seeking an order of committal of the respondents for contempt, the court resorted pasting the summons on the Regional Secretariat of the New Patriotic Party (NPP) and the Subin Constituency office at Asafo, a suburb of Kumasi.

Others party officials expected to avail themselves to court proceedings include, Patrick Acheampong, Ashanti Regional Director of Research and Election, Subin Constituency Chairman Michael Adusei Bonsu, and his Secretary Akuamoah Boateng would have to appear on August 17, 2020.

On July 21, 2020 the court presided over by His Lordship, Justice Charles Wilson, adjourned the determination of the case because the notice of motion had not been served on all the respondents.

On Friday, June 21, 51delegates including Isaac Nimako, Richard Owusu Nti and Yaw Boafo secured an injunction restraining the party’s election committee and the Electoral Commission from holding the primaries.

The ex-parte injunction, which was granted by the Kumasi High Court was effective from Friday to Monday, 22nd June, 2020.

“It is hereby ordered that the respondent and all persons claiming through the respondent (EC) refrain from holding the election scheduled to take place on Saturday, 20th June, 2020,” the court ruled.

On Thursday, June, 24, 2020, JB Danquah lodged an official complaint with a strongly-worded petition, calling for immediate annulment of the election.

The petition cited several breaches of the party’s constitution and presence of a court injunction to drum home the need for the cancellation of the election.

The MP who doubles as Deputy Works and Housing Minister and his cohost would be required to make submissions on why he should not be referred for prosecution, after previously claiming on a radio station that ‘nobody can order the party to re-run’ the elections.

In the said interview on Otec FM, the MP added, “As far as I’m concerned, the elections are over and those who think they can use the court to frustrate all of us are fighting a lost battle because apart from the party, nobody can tell us to re-run the elections,’’ the MP yelled, threatening to block any decision of such nature.

He continued, “Some people are dumb (sarcastically referring to his contender JB Danquah), they don’t understand election rules. If you are dumb and don’t understand the rules don’t say things you do not know. “JB is just wasting everybody’s time. He knew he was going to lose the election which is why he sponsored his people to go to court.’’

Abramovich is suspected of secretly investing in players of other clubs
Ibrahimovic has scored 23 consecutive seasons at club level
Rakitic on Messi and Suarez: We were never close friends. I am grateful for the way they treated me
Ibrahimovic scored for Milan in both games of the season. He will be 39 next week
Now the promotion does not differ from the badge on the chest. Players the CRC has not got down on his knee before the match and defended them black sortdir
Roma can be awarded a technical defeat in the match with Verona. The club incorrectly stated diavara
Zinchenko and Bernardo Silva will not play against Wolves due to muscle injuries
Source https://www.ghanaweb.com/GhanaHomePage/NewsArchive/Subin-MP-Wontumi-face-court-over-party-primary-1033426

‘APC is dead, all that is left is respect for Buhari’ – Okorocha explodes

CPP Beg Osagyefo For Forgiveness On His 111th Birthday

No nurses at major hospitals in Accra

APC Still Together Because Of Party’s Respect For Buhari, Says Okorocha

Countries must take steps to better prepare for future crisis, says WHO

Election 2020: Police advised not to engage in political activities

Ajax feels like a family to me - Mohammed Kudus

Kudus Mohammed voted into Eredivise Best XI of the Week

Nurses strike: Patients at Sandema hospital left to their fate

#BBNaija: I don’t want to be in a relationship with Neo again – Vee

NPP youth urged to be focused in their campaign

The stable economy I left for Akufo-Addo is shrinking – Mahama

I was not afraid to come up against Ronaldo, Ronaldinho, others in 2006 - John Painstil

#BBNaija: Nigerians predict winner, runners-up in the finale of season 5 next week Sunday

Testing passengers for coronavirus at the airport pays off - President

Males must be active in bridging gender equality gap

MCE honoured for being responsive to tourism-related development

A tale of Kwame Nkrumah, Ohene Djan and Real Republikans

Sons of the super-rich, popular & influential Ghanaian businessmen – A discovery