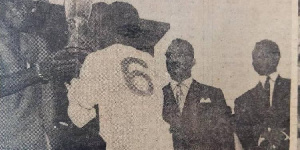 The victory over the Congolese clearly solved the four- year- old ‘dispute’ between the two clubs, all their previous three encounters having ended in drawn games.

It was a spirited performance put up by Asante Kotoko in this battle of equals at the giant Tata Raphael Stadium.

They surprised the home team with an intelligent spell of attacks and good defensive work to beat them in their own pattern of play.

This entertaining classic which dashed Englebert’s hopes of winning the cup for good saw centre forward Abukari Gariba put Kotoko into the lead in the 12th minute.

It was at this stage that both sides showed they could attack as well as defend with a purpose.

However, the difference between the sides was Robert Mensah who was at his best.

The Cape Coast-born international and ‘wizard’ goalkeeper stood between Englebert and victory.

He made fantastic saves that gave the impression that he might have some magnetism in him that attracts the ball.

After surviving the magnificent onslaught by the home team, Malik who was not at his best, connected home a low grounder ten minutes to time to give Kotoko a confident 2:1 lead.

It was a typical Malik Jabir drive and Kazadi could do very little about it.

Just as Kotoko was beginning to celebrate their victory, the referee awarded a penalty against them. Sportingly, Kotoko did not raise a finger and left-winger Tshinabu, perhaps scared by Mensah’s wizardly in the post, gave an almighty shot which sailed “MILES OVER THE BAR”.

Note: The final was played in January 1971, but it was 1970 Africa Champions’ Cup final and, therefore, in the record books Kotoko are the Champions of 1970.

Carragher on replacing Salah against Chelsea: I thought it was strange
Liverpool are Interested in Coulibaly
Golovin - the best player of Monaco in February according to the fans
Man City is preparing for Zinchenko a contract for 5 years with a salary of 90 thousand pounds a week (Claret&Hugh)
Salah's agent put an end to the tweet after replacing the player in the 62nd minute of the match with Chelsea
Ozil was carried off on a stretcher in the Fenerbahce match. He may miss at least a month due to injury
Bayern do not intend to buy Coulibaly from Napoli this summer

Efya, Gyakie, Cina Soul and Others Make It To 3Music Awards Top 30 Women in List » ™

Pastor calls for concerted approach to halt activities of LGBTQ+

Special clinics to be dedicated to pregnant teenagers — Doctor

69 teenage pregnancies recorded in Kpone-Katamanso in 2020

“When You Don’t Have Skeletons In Your Closet You Dnt Fear Dare!!”- Pope Skinny Jabs LGBT Group Who Promised To Expose Him

Some International Artistes Come to Ghana To Push For LGBT Rights, but That Is Not Why I Am Here

Streetbeatz Idolizes Stonebwoy As He Celebrates His Birthday Today

Lady Reveals Why She Wants To Have Two Boyfriends; Netizens Reacts

Ayisha Modi sends heartfelt message to Stonebwoy on his birthday