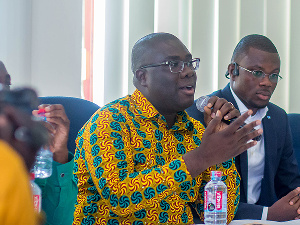 New Patriotic Party’s (NPP) National Organizer, Sammi Awuku, has asked Ghanaians to treat John Dramani Mahama’s promise to invest US$10 billion into infrastructure as a threat and not a promise.

Addressing the media on Thursday, August 13, Sammi Awuku said Mr Mahama will use the opportunity to enrich himself because the cost of the projects or infrastructure will be inflated, as has been done with previous projects during his tenure in office.

“Candidate Mahama claims that he will inject US$10 billion into infrastructure and use that to create jobs. He said this in a knee-jerk reaction to the Akufo-Addo programme to help Ghana’s economy recover from the COVID-19 pandemic. It appears Mr Mahama is very fond of figure 10 billion. Ghanaians must dismiss this as a total pipe down. In 2013, working with his good friend, Roland Aganbri amidst the great fanfare, Mr Mahama went to cut the sod for the US$10 billion Hope City project promising thousands of jobs in the process not knowing he had not even acquired the land for the project,” Sammi Awuku stated.

According to him, even though Mahama claims the US$10 billion infrastructure boost will create jobs for the youth, nothing of the sort will happen, but rather, a financial scandal is what will be left for Ghanaians.

He cautioned Ghanaians to be extremely careful with such promises from John Mahama, as he does not have any interest in the outcome of any projects and how it will benefit Ghanaians.

“When he also says he is going to build projects, Ghanaians should be extremely careful and be worried because of the inflated cost of these projects. He is not interested in the outcome of the project and the impact it will have on Ghanaians neither is he interested in value for money. So, when he says he is going to invest billions in infrastructure, Ghanaians must treat it not as a promise but as a threat, not as an infrastructural solution but a financial scandal. It must not draw you closer towards him but borrow his legs and run away with it,” he concluded.

Flagbearer of the National Democratic Congress, John Dramani Mahama a few days ago in an interview announced a US$10 billion accelerated infrastructural plan, dubbed the Big Push, which he says will drive jobs and entrepreneurial agenda when elected in December 2020.

“We are looking at what I call the Big Push, injecting some US$10 billion to dualise our roads, complete the remainder of the 200 Community Day Senior High Schools, finish all the hospital projects that have been left abandoned, and construct bridges to open up the country,” he said.

According to the former President, the Big Push as he calls it will involve the construction industry, engineering, and other professionals, and will bring a lot of artisans and everybody back into work, thereby creating more jobs for Ghanaians.

Alonso went on the bus after being replaced and was scolded by Lampard. So the coach has never been infuriated
Manchester United are Interested in Jovic and are in talks for Cavani
Inter have moved closer to Juve, but are unlikely to win Serie A. There are problems with the defense and Conte's system
Sane will miss about two weeks due to a knee injury
Rostov will reject the offer of Genoa for Shomurodov, as they want more than 8 million euros (SE)
Mendes earned about 20 million euros during the summer transfer window
Carragher on Arsenal: Liverpool are a few years ahead, but Arteta can take them to the Champions League
Source https://www.ghanaweb.com/GhanaHomePage/NewsArchive/Treat-Mahama-s-10-billion-infrastructure-promise-as-a-threat-Sammi-Awuku-to-Ghanaians-1033417