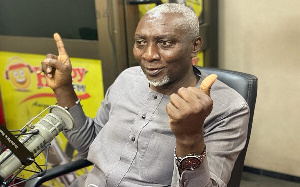 International Diplomatic Consultant Farouk Al-Wahab has posited that the siting of Twitter Africa Headquarters in Ghana cannot employ the teeming number of unemployed youth in the country.

He disclosed that the social media platform relies on a high level of technology and does not need a huge workforce to operate.

“Twitter cannot employ up to 200 people when it comes to Ghana. It is a high-tech company and does not need a huge work force. The platform is located in San Francisco and the rest of its operations is via networks. The firm has been operating for over 15 years and had only 5500 workers as at last year”, he noted.

He shared that the Twitter Africa Headquarters in Ghana simply gives Ghana the gravity of name and advised Ghanaians not to believe any politician who claims the company has employed thousands of Ghanaians.

“We are happy with the news but if we are talking about the benefits of the company’s Africa Headquarters being situated in Ghana, then we are not getting much”, he stated.

Speaking in an interview on the Epa Hoa Daben political talk show with Happy98.9FM’s Don Kwabena Prah, Farouk admitted Twitter chose Ghana because of its enabling environment and peace.

Jack Dorsey, Twitter CEO and co-founder, announced that the social networking service will be basing its new Africa headquarters in Ghana.

The announcement was shared, earlier this week on Twitter’s own blog and via Dorsey’s personal account.

Ghana’s President Nana Akufo-Addo confirmed the news, stating that Ghana welcomed the announcement and the confidence reflected by the giant social media company’s choice of country.

Coronavirus has damaged our economy so don't expect too much - Economist

How God turned a nobody into a great prophet: Story of Prophet Godwin Sarfo Annan

EC has no problem with NDC – Bossman Asare

Hajj to come off despite lingering COVID-19

Online drivers’ strike over issues of welfare, security of members

The coronavirus excuse is too much; hardships pre-date pandemic – Gatsi to govt

People like me because I 'fool', so I'll still ‘fool’ in acting – Rev Waakye

Your achievements are ‘dodgy’, address income inequality – Jackson to gov’t

#FixGhana: Akufo-Addo should be speaking, not Ofori-Atta -Jantuah

The Untold: From contemplating suicide to being an inspiration to many - The Emmanuel Dzikunu-Teikpa story

I have not released any video, all my comments come in an audio form – Dr Samuel Ofori Onwona

90% of Ghanaians living in Nigeria are aliens – Igbo king

Interbank Board: Exchange rate for May 10

Here is how much gold, cocoa are selling to open the 20th trade week in 2021