U-20 AFCON: We are determined to win the competition - Frank Boateng 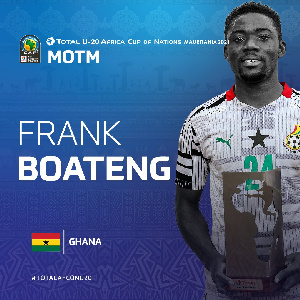 Black Satellites midfielder Frank Boateng says his side's target is to win the on-going Africa U-20 Cup of Nations.

The Satellites emerged 4-2 winners during the penalty shootouts after their game against Cameroon ended 1-1 after 120 minutes of football.

Ghana qualified to the quarterfinals stage as one of the best third-placed teams after a 4-0 win over Tanzania, drawing against Morocco and losing the final group game to Gambia.

"Our dream of winning the competition remains intact and we are determined to win just as we did in Benin," he said at the post-match press conference.

"Again we have shown that once again that we are good when it comes to penalties. Now we are motivated going into the next game", he added.

Boateng was named as the Most Valuable Player in Ghana’s win over Cameroon in the quarterfinals.

Ex-convict, friend get a total of 34 years for Robbery

Akufo-Addo commissions phase one of the B5 Plus Steel Plant