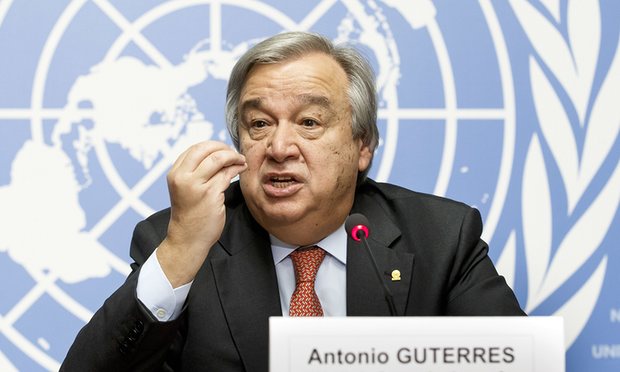 UN Secretary-General Antonio Guterres on Saturday voiced concern over civilian casualties and the destruction of media offices in Gaza by Israel, said his spokesman Stephane Dujarric.

The secretary-general is dismayed by the increasing number of civilian casualties, including the death of 10 members of the same family, as a result of an Israeli airstrike on Friday night in the al-Shati camp in Gaza, said Dujarric in a statement.

The secretary-general is also deeply disturbed by the destruction by an Israeli airstrike on Saturday of a high-rise building in Gaza City that housed the offices of several international media organizations as well as residential apartments, said the statement.

Guterres reminds all sides that any indiscriminate targeting of civilians and media structures violates international law and must be avoided at all costs, it said.

The 12-story al-Jalaa Building, where the offices of the Associated Press, Al-Jazeera and other media outlets are located, was leveled in an Israeli airstrike. Israel claimed the building housed Hamas military intelligence elements.

If Witches Existed, I Would Have Been Dead A Long Time Because I Run My Mouth More Than Anyone, Just Hustle And You’ll Make It

I ‘mellowed’ for Efya to rise to fame- Nana Adwoa Awindor

EL Is Our Godfather, We Planning Of Working With Him Again- Dope Nation On Their Relationship With EL

My Love For Her Simplicity And Decency Is Unmatched

We Are Never Breaking Up As A Musical Duo- Dope Nation

Songwriter of the Year is for me, hands down – Kofi Kinaata

We Are Always Fighting Each Other- The Dope Nation Brothers

The KNUST alumnus who designed the VGMA plaque

We Are Yet To Work With Artists From Takoradi- Dope Nation

Euro 2020: France top group as Portugal go through with draw

Over 200 MoMo agents attacked between January

Vodafone enables musicians and industry players to own personal website

Remittances to Ghana reaches $3.6b

Kennedy Agyapong honoured on his 61st birthday with youth conference