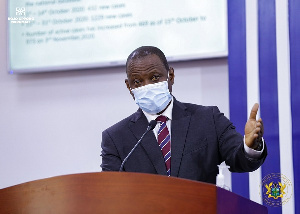 Dr Patrick Kuma-Aboagye, the Director-General of the Ghana Health Service

Dr Patrick Kuma-Aboagye, the Director-General of the Ghana Health Service has said that priority will be given to persons due for second jabs in the administration of the AstraZeneca vaccines that arrived in the country last week.

But Dr Kuma-Aboagye explained that not all persons who took the first shot are due for the second jab hence the decision to give it those who qualify.

He said that some persons have clocked the 12 weeks mark and will be given priority to them.

“We have the information and data of those who took their vaccines early and as we speak, not everybody is even qualified to get the second dose because it depends on when you had your first dose.”

“So we are going to follow the same routine to ensure that those who are due and those who are closest to the 12 weeks will be our priority until everybody is done,” he said.

Meanwhile, Dr Franklin Asiedu-Bekoe, Director of Public Health at the Ghana Health Service has said in an interview that the vaccines received from Congo would expire on June 24, approximately seven weeks from now.

“We will be getting in touch with people to come for their second doses through text messages, calls, and public announcements,” he said.

He explained that Congo’s consignment was shipped to Ghana after it failed to utilise them weeks after receiving them.

“The vaccine we received today from Congo is part of the first batch we received in February – COVAX re-allocated them to Ghana because Congo has not been able to utilise theirs,” he said