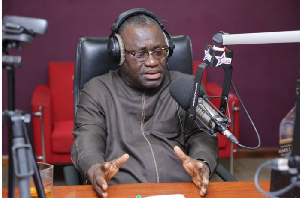 Professor Kwesi Aning, the Director, Faculty of Academic Affairs & Research, at the KAIPTC

Director, Faculty of Academic Affairs at the Kofi Annan International Peacekeeping Training Centre, Professor Emmanuel Kwesi Aning, has claimed that some vigilante groups have ventured into illegal mining ‘galamsey’ while others have been received in the various security services in Ghana.

Vigilantism and their illegal acts have come up again after the attempted abduction of the Regional Security Coordinator, DCOP (Rtd) Kweku Ayensu Opare-Addo hit the airways.

Adding his voice to the discussion on vigilantism in an interview on JoyNews' PM Express, Prof. Kwesi Aning stated that the disbanding of the vigilante groups was just a decoy as many of them now find themselves in the various law enforcement agencies while others continue to engage in other illegal activities like 'galamsey'.

“Vigilante groups are now franchising the skill set that they have into law enforcement, mining, cattle rustling, logging of rosewood, and taxing agricultural goods particularly charcoal." He noted.

Meanwhile, DCOP Opare-Addo while recounting his ordeal stated that four of the seven men who attacked him in his office with a buttstock of an AK-47 rifle were known associates of the supposedly disbanded vigilante group – Delta Force.