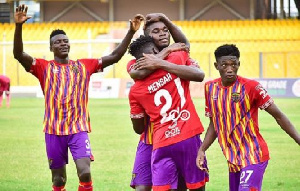 Accra Hearts of Oak head coach, Samuel Boadu, has set his sight on picking all three points against Legon Cities on Wednesday, June 16, 2021.

The Phobians will play as guests to the Royals in the matchday 30 games at the Accra Sports Stadium.

Accra Hearts of Oak continued their impressive run under Samuel Boadu in their matchday 29 game against Medeama SC.

Ibrahim Salifu and Benjamin Afutu were the goal scorers on Sunday, June 13, 2021, to ensure that they stay on top of the league log.

“As I said earlier, Hearts of Oak is playing match after match, now we have finished with this [Hearts vs Medeama] match, it’s history, we have to throw it back," he said after the game on Sunday.

“We have to concentrate on the next match we are going to play and we take match after match and we believe that definitely, we are going to take that three maximum points as well," he added.