Winner Takes All: Gyimah-Boadi calls for restructuring of 1992 Constitution 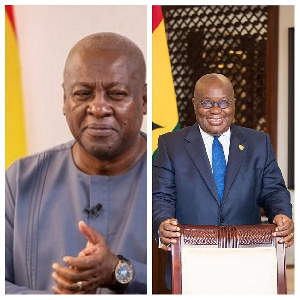 Executive Director for Afrobarometre, Professor Emmanuel Gyimah-Boadi has advocated for the amendment of Ghana’s 1992 Constitution to reduce the executive powers of the President, as part of efforts to address the “Winner Takes All” syndrome.

“And we are not going to get rid of crazy partisanship and Winner Takes All, unless we do a fundamental restructuring of the structure of our politics and particularly the constitution; so that it does not concentrate power in the hands of the President and the executive branch and therefore, the governing party,” Prof Gyimah-Boadi stated at the Centre for Democratic Development’s (CDD-Ghana) Roundtable on Rawlings and Democratic Development in the Fourth Republic.

He said the constitutional review is essential and necessary for the existence and continuous progress of the nation.

“Secondly, we’ve got to also change the culture of Ghana; we have to significantly mend our ways, and one of the ways to do that as history has shown over and over again is to have citizens who have a real sense of duty,” he said.

“Duty, meaning being willingness to pay your taxes, being available for national service if the nation needs you, being making yourself available for voting if you have to vote, making sacrifices and bringing a balance to this idea that you can have citizenship without obligations. Because it is that imbalance that makes us all sit somewhere and say that well ‘CDD you talk corruption, some people are being corrupt, go and talk about it and then I don’t have any part in this. We have to change that. And we do that because we do not recognize ourselves as citizens but rather as clients.” he added.

Dr Christine Amoako-Nuamah, a former Education Minister and a former Presidential Staffer, said there is the need for Ghanaians to build upon some of the legacies of former President Jerry John Rawlings.

She suggested that there should be a vibrant civic education in order to get the citizenry well informed on civic rights and responsibilities.

“He was thrust on us by some groups, especially June 4th and all that. So, when I reflect, I tell myself that if we had not experienced all that in our body politics or exercise of leadership, we wouldn’t have even known Jerry Rawlings, he would been retired as an army officer but exigencies of the time brought him into the limelight,” Mr Oppong-Ofosu said.

“So, what are the lessons? Did we learn anything from that or are we back on the issues of exercising power with impunity? Are we on the path of a bracing corruption and all the issues that resulted in we having Jerry Rawlings as a leader? he quizzed

Kurt Okraku has shown leadership on fight against hooliganism

Unions' allegations against me are untrue — ECG MD

I moved to Georgia because of the Black Sea

Mahama signs book of condolence in honour of Prince Philip

Akufo Addo did not waver in galamsey fight; he walked his talk – Samuel Jinapor

Stephen Appiah’s son wants to be better than dad

Dumsor: Why not give us timetable than destroying properties

Lack of funds cause of recent dumsor - Jinapor discloses

Be truthful to Ghanaians – Jinapor to government