$144M in machinery commissioned to improve drainage in Pomeroon

AGRICULTURE Minister, Zulfikar Mustapha, on Thursday, commissioned a pontoon and two-long reach excavators to assist with executing a series of much-needed drainage works in farming communities along the Pomeroon River.

The pontoon worth $84M and two Hyundai excavators worth $30M each were handed over to the Region Two Administration.
Speaking at the commissioning held at Charity, Minister Mustapha said the delivery of the equipment was a fulfilment of a promise made to the people of Pomeroon to boost drainage and irrigation in the Pomeroon River. Over the last two years the Pomeroon has suffered from instances of flooding and the equipment will be used to improve the river defences there.

A committee comprising toshoas, Neighbourhood Democratic Council officials, farmers and residents will manage the machinery and Minister Mustapha urged that they be put to good use.
“As a government, we will continue to invest in the interest of the population,” said Mustapha. 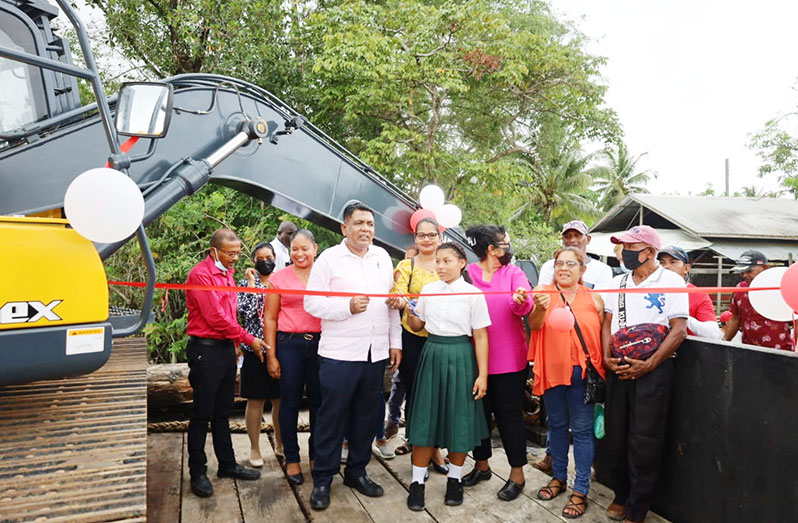 Chairman of the National Drainage and Irrigation Authority (NDIA), Lionel Wordsworth said the project was conceptualised to improve drainage and irrigation in the Pomeroon River.
The pontoon and excavators can be used to access difficult terrains in the riverain communities.

Toshoa of St Monica, Eve Samuels said she was happy with the delivery of the equipment as her community needed proper drainage and irrigation.
Randolph Williams, another resident, was also thankful for the machine.

“This is what we need and we got it in no time, thanks to the government,” Williams said.
Also at the commissioning were Regional Chairperson, Vilma De Silva; Regional Vice-Chairman, Humace Oodit and Regional Executive Officer, Susannah Saywack.

While in Region Two, Minister Mustapha met with groups of fisherfolk there to discuss the $150,000 one-off relief grant that was recently announced by President, Dr. Mohamed Irfaan Ali.
During the engagement, Minister Mustapha said that, since assuming office, the government had been working to improve the lives of citizens and will be making the funds available after the verification process was completed.

The minister also said that although reports suggest that the catches have been improving, fisherfolk were still finding it difficult to afford basic household items for their families and that the grant will be able to assist with those needs.

He also met with rice farmers in the region to discuss the rollout of the fertilisers assistance programme. Some $250 million in fertilisers assistance had been allocated for rice farmers of the region.
Minister Mustapha told the farmers that a committee comprised of farmers from across the region will work with representatives from the Guyana Rice Development Board, the Rice Producers’ Association and the Water Users Association to guide the process of distribution.