– Has been shipping out resource since 2018

Kaieteur News – “The extreme low impurities make this bauxite stand out in a class of its own,” is how an American Company, First Bauxite LLC (FBX), described its bauxite find in Guyana on its website (https://firstbauxite.com/about) . The company announced that the find represents the “highest quality mega bauxite find” at its Bonasika Mining project located on the right bank of the Essequibo River, Region Three, just 10 miles above Parika, East Bank Essequibo (EBE). 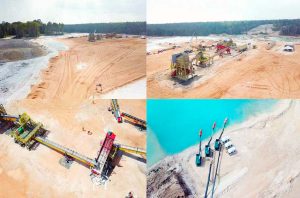 Overhead shots of the Bonasika Mine taken in 2019 (Photo Credit: FBX LLC)

FBX via its 100 percent owned subsidiary, Guyana Industrial Minerals INC. (GINMIN), has been in the country since 2008, exploring lands here for bauxite and hit the jackpot at its Bonasika concession which spans an area of approximately 18, 940 acres of land.
At the opening ceremony of the Bonisika Bauxite mine in February 2020, the company’s Chief Executive Officer (CEO), Bill Rice made some remarks. He said, “The government has been with us since day one which is many years ago starting with the ability to explore this area which started when our geologist were walking down along that creek over there (pointing to an area in Bonasika) and all of a sudden saw a lot of crop and said: ‘Oh what is this material?’ and they picked it up with their hands and it turned out to be the highest quality bauxite in the world.”
The company, in boasting of Guyana’s bauxite on its website, said that it is in a class of its own. FBX stated that high grade bauxite has little impurities thus making it cheaper to mine and produce.
“The bauxite mined from the Bonasika mine contains a high amount of alumina and low tramp elements making bauxite economical for the production,” stated the company.
The raw bauxite ore being taken out of Guyana’s earth is 63 percent grade which is of higher quality than most found in countries across the world. When the bauxite is sintered (meaning purified by a factory), its quality jumps to the highest in the world standing at a grade of 93 percent, the FBX explained.

A table showing the chemical composition of the bauxite quality found in Guyana. (FBX)

This extreme high quality could make Guyana’s bauxite the most expensive on the world market because, according to FBX, it is an “excellent material for hot strength, refractoriness and very resistant chemical attack and abrasion.”
This means that the products that it can make will be considered “high end” and so durable that it can last a lifetime.
FBX noted too that “The low silica and low impurities make First Bauxite’s Calcined product a superb choice for steelmaking slag conditioning.”
The Bonasika Bauxite from Guyana is also excellent for making strong lightweight ceramic proppants – a high quality material used in deep water well operations in the oil industry.
However, while many Guyanese might be happy that their country is blessed with such high quality resources, they have been left in the dark about the revenue they stand to gain from the export of their bauxite by the foreign company.
In fact, FBX has been shipping bauxite since 2018 and citizens have no clue about the revenue that they have gained from this expensive resource being mined from their land.
The company was granted its mining licenses by a previous People’s Progressive Party Civic (PPP/C) administration but had started small scale production under the David Granger-led regime, A Partnership for National Unity + Alliance for Change (APNU+AFC), in 2018 before officially opening the Bonasika Mine in February 2020, still under the APNU+AFC.
According to an article published by Informed Industrial Mineral Forums and Research Ltd. (IIMFR) which was written by Mike O’Driscoll – an expert with over 30 years experience in the international mining industry – FBX in June 2018, shipped its first 1000 tons of bauxite from Guyana to a Chinese customer. It then followed up with a second shipment of 4100 tons of bauxite, later that same year in October but this time to a European customer.
However, after officially opening the mine, the American company made its first bulk export of 6,500 tons of bauxite in July 2020-one month before the current PPP/C took office-to the USA.
FBX then followed with another bulk shipment of Bauxite to Western Europe, weighing approximately 9,500 tons and since then it has been shipping out Guyana’s Bauxite, to North and South America, China, India, Europe, Ukraine, and Africa.
O’Driscoll in his article quoted the company’s Vice-President of Sales and Marketing, John Karson, saying that ‘as their customers increase their volumes’ FBX will make larger bulk shipments and noted that ‘exports to China and India were of good value’.
While the foreign company continues to boast about the success it has been having with “Guyana’s high grade bauxite,” citizens oblivious about the contractual arrangements between the country and the foreign company.
It should be noted, however, that research done by the trading websites such as, Trade-Metal.com, found “non-metallurgical grades (High Grade) of bauxite”- like the grade found at Bonasika – are rare to find outside of China and prices per ton can reach as high as US$500.
Currently, according to FBX, its wash plant at Bonasika, can produce as much as 30,000 metric ton of bauxite per month.
“FBX’s wholly owned subsidiary, Guyana Industrial Minerals Inc. (GINMIN), is the mining arm producing washed bauxite at the rate of 30,000 MT per month,” stated the company.
FBX also added that, “it is marketing the high-grade bauxite globally as a raw material for refractories, for aluminum sulphate production, as a UHSP deep-well proppant in the oil industry, plus as an abrasive and steel making slag conditioner.”
That means the foreign company might just be shipping out a total of 360,000 metric ton of bauxite per year.
Trade-Metal.com, on its website stated that the average price for high quality bauxite from suppliers range from US$150-US$500 per ton. If perhaps US$150 is being paid per ton of Guyana’s “High Grade” bauxite then 30,000 tons will be equivalent to US$4.5M.
That means, if FBX is producing at full capacity and selling at the minimum value price then they are shipping out US$54M worth of bauxite from Guyana each year. If the company is being paid more (US$500) by its customers then FBX could be raking in as much as US$180M in annual sales or even more.
It should be noted too that FBX has found five bauxite deposits in Guyana, Bonasika 1, 2, 3, 6 and 7.
In 6 and 7 alone, there are estimated proven and probable bauxite reserves of over 13 million tons. The company is currently mining the Bonasika 7 deposit and estimates the mine life to be about 15 years.
As it continues to ship out Guyana’s bauxite, FBX is still exploring Guyana’s lands for more quality bauxite while the contractual arrangement remains a state secret. (Additional information sourced here: https://imformed.com/guyana-bauxite-newcomer-starts-bulk-shipments/, https://trade-metal.com/bauxite-ore-c930.html)