MORE than $830M has been invested in Region Five to create jobs, support small-business development and provide assistance to farmers through the supply of free fertilisers to them.

Though announcing on a previous visit that some 1,000 part-time jobs will be provided to residents of the region, Vice-President Dr Bharrat Jagdeo in a follow-up outreach on Tuesday said that this number will increase due to the high number of applicants for the programme.

Region Five is primarily a farming region, and the 1,000 plus jobs, aside from providing an avenue for employment outside the traditional agricultural sector, will also supplement the incomes of households squeezed by the rising cost of living occasioned by COVID-19 and the Russia-Ukraine war.

Hundreds of residents on Tuesday converged on the Mahaicony Technical Institute and the Bath Market Tarmac to sign contracts for the part-time jobs that will see them being placed at government offices, agencies or departments, where they will be paid $40,000 per month for 10 days’ work.

With more than 1,000 persons to be employed, each earning $40,000 per month, the government will be investing over $480M annually into the region through the programme.

Addressing a large gathering at the Mahaicony Technical Institute, Vice-President Jagdeo explained that that contrary to misinformation being peddled by elements of the APNU+AFC Coalition, the jobs are not temporary, nor will they end after a short period, but are part-time. This means that after the one-year contract expires, it could be extended and the extension could be for an indefinite period.

With the majority of applicants being young people, the Vice-President urged them to see their employment as a stepping stone to greater accomplishments. On this score, he encouraged them to get enrolled under the GOAL scholarship programme and to utilise the time they are not working to study.

Dr Jagdeo emphasised the importance for Guyanese, especially young Guyanese, to qualify themselves and to be prepared for the jobs of the future that the development of Guyana will demand.

He also called out Opposition Leader Aubrey Norton and Coalition parliamentarian Ganesh Mahipaul for criticising the part-time jobs being provided by government. 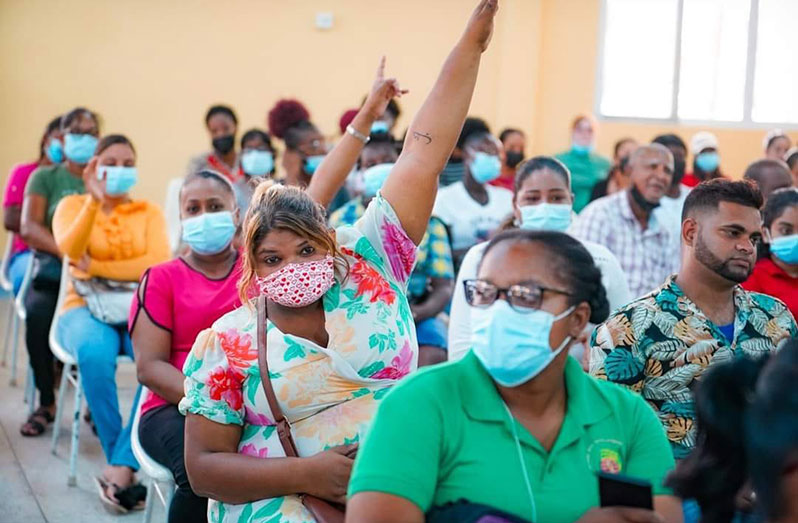 NECESSARY
Dr Jagdeo explained that the part-time jobs are necessary, pointing out that when the PPP/C assumed office less than two years ago, it was faced with a situation where over 70,000 persons had lost their jobs.

Due to the poor policies of the APNU+AFC Government, he said in the space of five years (2015-2020), over 35,000 lost their jobs through estate closures and contraction in the agricultural, mining and forestry sectors, as well as other segments of the economy. This situation was worsened by a slowdown in the global supply chain as a result of COVID-19 and the Russia-Ukraine war, which has caused an upward spiral in the prices for fuel, wheat and products that are made from these two vital commodities.

When the Coalition closed the economy on the advent of COVID-19, Dr Jagdeo pointed out that a similar number of persons lost their jobs. He contended that the Coalition should be the last to criticise the government on job creation and types of jobs, informing the well-attended gathering that it was the Coalition that had closed the call centre in Linden, its stronghold, that put 88 Lindeners out of jobs.

The part-time jobs programme has so far been rolled out in Region 10 where 1,000 persons have been employed; Region Two, where some 2,000 persons gained employment and Region Six, where 3,000 are now part of government offices, departments and agencies.

The PPP/C in its 2020 manifesto promised to create some 50,000 jobs in its first five years in office. Thus far, thousands of jobs have been created through the roll out of large-scale government projects and private sector investments. Under the part-time jobs progamme, some 10,000 are expected to be created to support incomes at the household level. With the scale of development that is expected in Guyana over the next few years, Vice-President Jagdeo said the government will have to revise the 50,000 target to 100,000 by 2025.

SUPPORTING SMALL BUSINESSES
At a separate meeting held at the farmers’ drying floor in Naarstigheid, Dr Jagdeo delivered on a promise to provide some 200 small-business grants to the region during his previous outreach.
Each grant is worth $250,000. They are geared to helping persons to start businesses or to expand the operations of those with businesses who need capital to do so. The 200 grants at $250,000 each means that some $50M has been invested in Region Five to support growth and development of small businesses there. Over the past few weeks, the same number of small-business grants has been disbursed to residents of Region Two and Region 10. Some 4,000 were given to residents of Region Six as this region was most affected by the closure of sugar estates by the APNU+AFC Government.

The government, Dr Jagdeo reiterated, is committed to delivering on its manifesto promises. This was a common theme in his messages to the gatherings at the farmers’ drying floor in Naarstigheid, the Mahaicony Technical Institute and the Bath Market Tarmac.

At another meeting at the Mahaica, Mahaicony, Abary/Agricultural Development Authority (MMA/ADA), his message was no different. There, he announced that $300M will be allocated to farmers in the region to purchase fertilisers for their crops. The farmers will form themselves into a committee; they have been tasked with ensuring fair distribution of the free government fertilisers.

SHARING THE HEAT
“We have had a bad experience when we try to distribute help to people. In the flood we set aside nearly $8B to help people adjust to the flood… we did so on the COVID grant; we had a lot of people, this was going to 300,000 odd families, we went to people’s homes and lots of people tried to rip off the system…. The same thing happened with the flood assistance. Most people got help but a small per- centage did not get help and they were eligible… and some managed to sneak through the system; they should not have gotten but they got it. Again, we took the heat for that. We don’t want a repeat of this, so that is why today we want a committee set up for the farmers. You will choose the people, 20 maybe 25, who will work with us. You will now work to make sure that they buy the fertilisers at the cheapest price, good quality fertiliser and then you will make a determination as to who will get and what quantity. The farmers themselves working with the ministry and then you will oversee the distribution, so that when any heat comes we will be sharing this heat now,” he said.

The prices for fertilisers on the world market rose by 80 per cent in 2021 and has already risen by a further 30 per cent since the start of 2022.

The support to farmers with free fertilisers is part of the government’s effort to absorb the rising global costs for the commodity, and to prevent the costs being passed on to consumers.

Since coming to power, Dr Jagdeo said the PPP/C has delivered on a vast majority of its manifesto promises. He said the children’s cash grant has been restored and increased from $10,000 to $25,000. It has also been extended to children in private schools and is expected to further increase to $50,000 by 2025. The children’s school uniform voucher has also increased from $2,000 to $5,000; old age pension has increased by 40 per cent; VAT on water, electricity, medicine, food, agricultural inputs, machinery and other burdensome taxes have been removed; more than 11,000 house hots have been distributed; thousands of homes are being built for Guyanese and billions of dollars have been distributed as relief grants to Guyanese from farmers, to residents, to fishermen.

The government will also be building seven modern hospitals, four state-of-art diagnostic centres in the hinterland regions, a national stadium at Palmyra that will create a commercial hub in that location as well as the gas-to-shore project, the Amaila Falls Project and solar farms to produce 35 megawatts of energy. The government is hoping that the latter three projects, when they come on stream, will cut energy costs by 50 per cent.