“Cash-strapped” China Railway among 7 vying for $4B road project

“Cash-strapped” China Railway among 7 vying for $4B road project

Kaieteur News – China Railway First Group, the company that recently informed the government of its inability to secure finances to execute the Amaila Falls Hydro Project, is now among seven contractors vying for the contract to expand the New Amsterdam to Corentyne highway.
The New Amsterdam to Corentyne highway expansion project is one being undertaken by the Ministry of Public Works. During the opening of tenders on Thursday at the National Procurement and Tender Administration Board (NPTAB) office, it was revealed that this is just phase one of the highway project which is estimated to cost $4,820,826,400.
Phase one, according to information from the NPTAB office, is divided into two lots with lot one estimated at $2,322,808,900 and lot two at $2,498,017,500.
The contractors vying for the project are as follows: Kares Engineering Inc. – Lot1 $2,228,511,205;China Railway First Group Corporation Limited – Lot1 $2,974,838,350, Lot2 $3,868,058,335; Berbice Construction Consortium – Lot1 $2,111,032,715, Lot2 $2,294,363,680; VR Construction Inc. – Lot1&2 $5,391,501,820; AJM Enterprise – Lot1 $2,759,506,060, Lot2 $2,637,551,920; H. Nauth & Sons – Lot1 $2,141,255,195, Lot2 $2,437,467,235; and China Road & Bridge Cooperation – Lot1 $3,478,146,849, Lot2 $3,208,455,206.
Talks on expanding the highway were brought up by Vice President, Bharrat Jagdeo late last year, who noted in a press conference that the government is looking to have this project on board, so as to facilitate the increase traffic that will come when the Guyana to Suriname river bridge is open.
The Vice President while engaging farmers and residents at Number 63 Village on Friday, June 03, 2022 said that some $8 billion is set aside to upgrade the road and that it will be paved and widen some four feet on both sides.
“We set aside $8 billion to widen this road, we were thinking about four lane from New Amsterdam all the way to Moleson Creek but the width, we can’t do four lane because some of the houses are close by in some areas so we are going to widen it to like 4ft on both sides, 8ft more and repave the whole road from New Amsterdam to Moleson. This year you are going to see them moving the pipelines off the shoulders and also the Guyana Power Light (GPL) utilities moving it out off the alignment and next year we can come and pave the road. This will cost over US$100million,” Jagdeo said.
During the opening of tenders also, minutes were read for the design and supervision service for the reconstruction of the North West Secondary School. This school was gutted by a fire last year.

Below are the companies and their bids:

Ministry of Education
Design and supervision of service- reconstruction of North West Secondary School, Region One. 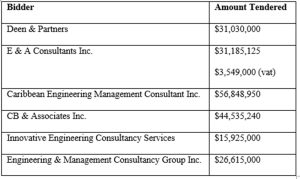 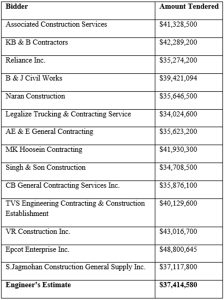 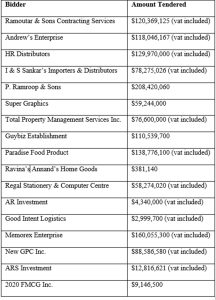