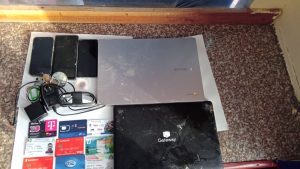 Several of the stolen items that were recovered from a house at Plum Park, Sophia

The cellphone tracker on a stolen phone has led to the arrest of three of four men who staged a multimillion dollar robbery committed on a lawyer and seven businessmen early Wednesday morning at La Bonne Intention (LBI), East Coast Demerara, police said.

“One victim, upon tracking his phone, led police to an abandoned house in Plum Park Sophia,” the Guyana Police Force said.  Several stolen items, according to police, were recovered in a red Digicel bag at that location. They are two laptops belonging to Michael Kunjbehari, one Samsung S10 cell phone belonging to Robin Satrohan, one Samsung Note20 Ultra phone belonging to Attorney-at-Law Everton Lammy-Singh and an iPhone 13 belonging to Anthony Joseph along with an ID card.

Police said after the bag was dusted for fingerprints, they acted on information and went to a house at North Melanie, East Coast Demerara where three suspects were arrested and taken to the Beterverwagting Police Station.  “They were placed into custody and were identified by the victims as the perpetrators,” police said.

The robbery occurred at around 1:30 Wednesday morning at Fourth Street, La Bonne Intention (LBI), East Coast Demerara where the eight victims,  along with five other friends, were at a birthday celebration. They alleged that four identifiable males armed with guns entered the house through a back door which was not locked and relieved the victims of the mentioned articles and cash.

The men then made good their escape in a waiting car.

The victims and articles stolen are as follows:

1) Michael Kunjbehari, a 36-year-old businessman of Fourth Street, Turkeyen, Georgetown to wit:
Two laptops valued at $200,000, $1.2 million in cash (GC), along with one ID card

7) Ramsammy (only name), a 27-year-old Canadian citizen of Torrey Pines Boulevard, Sarasota, Canada to wit:
One gold chain valued at $1.1 million, one gold ring valued at $32,000, a red wallet containing a Canadian driver’s license, ID card and bank card, and $63,000 in cash (GC).