– as initiative taken to Linden on Wednesday

Residents of Linden, Region 10 (Upper Demerara-Berbice) turned out in their numbers at the Watooka Guest House on Wednesday to take advantage of the Government’s Home Construction Assistance Programme. 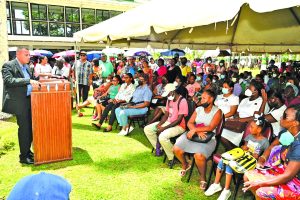 The programme was conceptualised by President Dr Irfaan Ali, to provide assistance to Guyanese with Government or private land to access finance to construct their homes.
The initiative was officially launched on Monday, and already Housing and Water Minister Collin Croal has accepted close to 90 applications.
Minister Croal had stated that the programme was part of the People’s Progressive Party/Civic (PPP/C) Government’s aggressive national housing programme that will see Guyanese given the opportunity to become homeowners. 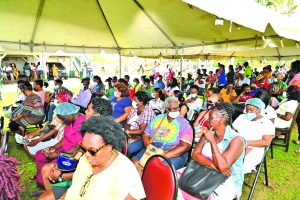 In the case of Linden, he noted that the Government was aware of the challenges within the housing sector and as such, steps have been taken to implement initiatives such as the 1000 homes programme to meet the housing needs of the mining town. Additionally, over 300 house lots were allocated to residents in Amelia’s Ward.
“The housing programme that is being implemented in your community will not only provide a safe space for you and your families, it will make for a stronger community, and be a source of employment and entrepreneurship and this, in turn, will drive the overall development of the region,” he told residents.
While the government is pushing its housing programme in communities across the country, simultaneously it is investing billions of dollars to ensure the necessary infrastructure is in place within communities.
Under this initiative, applicants can select one of three models of units available: a two-bedroom flat unit costing $7 million, a three-bedroom flat unit (bungalow) for $9 million and a three-bedroom elevated unit for $12 million.
Registration was conducted on the spot by a team from the Ministry’s Central Housing and Planning Authority (CH&PA) along with representatives from the New Building Society (NBS) and Republic Bank Limited who accepted applications for loan processing.
The application process will continue and persons can visit the Linden Regional Office from Monday to Friday during working hours. Persons can also visit the Ministry’s website at www.mohw.gov.gy or www.chpa.gov.gy.