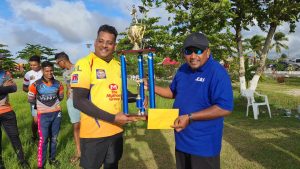 In the championship game at Togetherness Park at Liliendaal, Speedboat made 103 from their allotted 10 overs and Grill Masters City Stars knocked off the target in 8.2 overs.

For the victory, Grill Masters City Stars of New Amsterdam, Berbice, copped the championship trophy and G$100,000, compliments of Vitality Inc., while West Demerara-based team Speedboat collected the runner-up trophy and G$50,000, sponsored by Rockaway Roti Shop of New York and the GCOS.

In the third place playoff, Savannah Stars of Canal Number Two scored 82 from their quota of five overs and then restricted Hydro Pure of Success, East Coast Demerara, to 74 to win by eight runs.

GCOS member Rajan Tiwari said the competition was a resounding success, as he thanked all the teams for showcasing their talent as part of the anniversary activities.

He noted the contributions of the many corporate partners, who played their part in ensuring the tournament came off the ground.