Kaieteur News – The Ministry of Health (MoH) yesterday released a letter from the Russian Direct Investment Fund (RDIF) Director-General, Alexander Christyakov, which dismisses Opposition Leader, Joseph Harmon’s malicious and reckless statements that the Sputnik V vaccines in Guyana are fake.
According to a press release issued by the Health Ministry, the batch numbers issued by the RDIF matches that of the vaccines the Ministry has received, indicating no uncertainty about the authenticity of the vaccines.
The release further states that Harmon has demonstrated that scoring cheap political points trumps the wellbeing and welfare of citizens. The Ministry in its release called on Harmon to publicly withdraw his irresponsible statements and to publicly apologise to the Guyanese people for the irreparable harm he has done to the national vaccination programme. 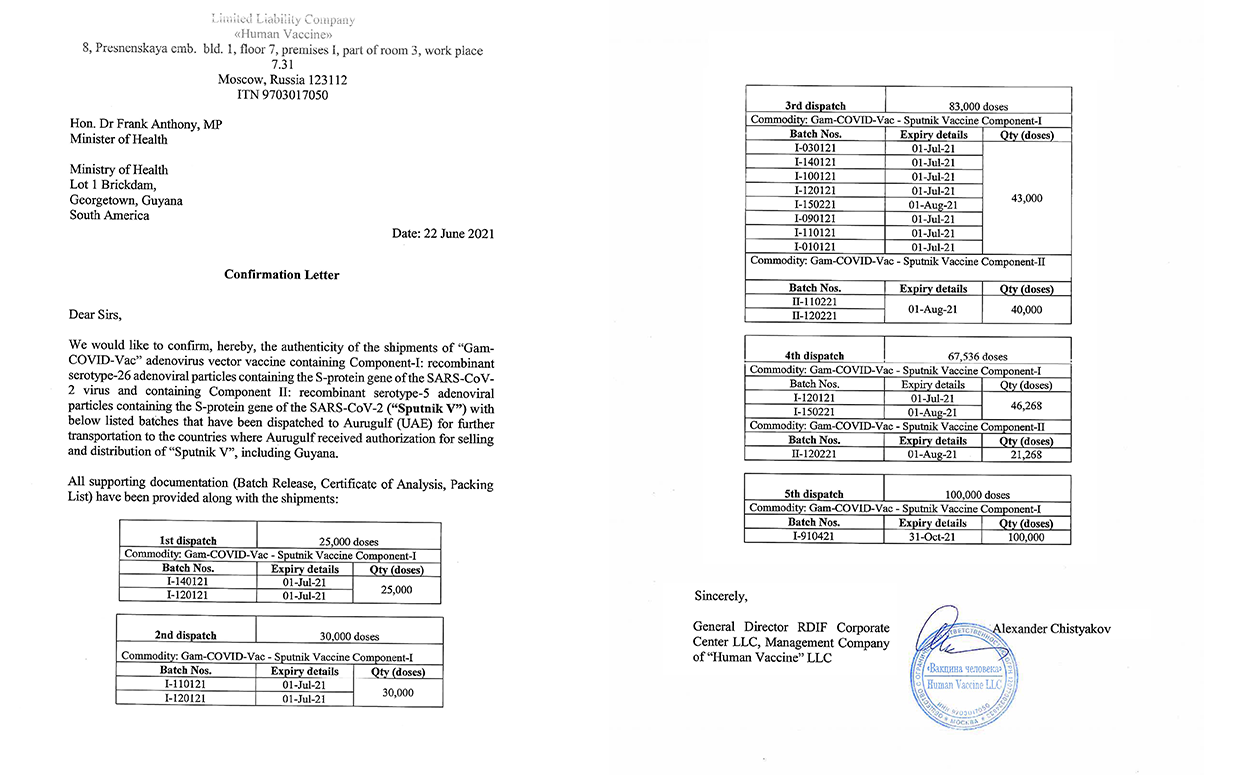 Documents from Russia confirming the authenticity of the Sputnik V vaccines.

Three critical after crashing into parked truck at Utivlugt

Trio critical after car crashes into parked truck at Uitvlugt

Letter: Those who filed NCM against Granger are part of the failed leadership of the party

Woman stabs teen for breaking up with her

Guyana recording “slowdown” of persons getting vaccinated against Covid-19

Mother of 3 kills man who constantly abused her

Man with history of domestic abuse killed during scuffle with wife

There are more questions than answers at City Hall

Caribbean Cycling Championships to pedal off on August 12

The death penalty is a lawful sentence – DPP tells CoA

Contractors’ payments on hold for incomplete works at Plegt Anker

Lethem woman stabs man after he signaled end to relationship

EYEWITNESS: All talk… by G-20 on Climate Change

Water safety techniques to be included in schools’ curriculum

‘No entry’ to Trinidad and Tobago nationals unless fully vaccinated, COVID-19 negative

1 killed, i injured after UG student loses control of car

Car ploughs through fence, killing one, injuring another

International Day for the Conservation of the Mangrove Ecosystem/Mangrove Day

After investing everything she earned in Canada, remigrant Somie Persaud has lost it all to flooding

Cases dismissed due to no-case submissions

GECOM must get rid of all un-wanted elements

GCA to resume cricket season with U17 competition

Restart of cricket high on agenda at BCB meeting

IDB to strengthen women-led SMEs in Guyana, other countries

Residents of Kabakaburi Mission now have access to mobile service

T&T nationals must be fully vaccinated before entering Guyana

Guyana to benefit from $1.6B project to strengthen women-led enterprises

$500M for road works in Region One

Sandvoort Health Centre and the NDC