Trinidad Int’l Energy Conference…
By Kiana Wilburg & Davina Bagot in TT
Kaieteur News- While it remains focused on seizing the sweet opportunities for prosperity in Guyana’s oil sector, Trinidad and Tobago’s Energy Chamber has urged its government to expand its reach to other territories.
Specifically, Chairman of the Energy Chamber, Dwight Mahabir was keen to note during the opening of his country’s energy conference being held at the Hyatt Hotel, that TT should pursue significant gas resources in neighbouring territories, especially Venezuela but also potentially in Barbados and Grenada.
In addition to significant untapped offshore gas fields off both Venezuela’s north coast and the Plataforma Deltana area, Mahabir said there are significant volumes of associated gas produced onshore Venezuela that is currently flared. The Chairman said on the North Monagas oilfields in eastern Venezuela alone there is more natural gas that is flared than the current demand shortfall in Trinidad & Tobago. He believes this is a significant climate issue that the world should have on its agenda.
As a solution, he proffered that Trinidad should secure these resources for export. While it might pose some political challenges, he said it has significant potential economic and social benefits. “This issue is too important to be ignored, despite the overarching difficult geopolitical situation. We know that this issue is very high on the Government’s agenda and that there is intense diplomatic activity taking place at the highest levels,” the Chairman said.
While the foregoing is important to secure additional natural gas supplies and extend the life of the CARICOM nation’s petro-chemicals industry, they are not, of course, the only things the country needs to be doing. In this regard, the Chairman said there are significant opportunities in the energy sector within the wider Caribbean. He said, “The unprecedented growth of Guyana’s oil and gas sector has presented many opportunities to regional energy services providers and a wide array of other services, including construction, professional services and entertainment. Suriname also holds significant potential and like everyone else in the industry we are actively observing developments there with a lot of interest.”
The Chairman added, “But it is not just in Guyana and Suriname oilfields where the opportunities exist. There are also significant opportunities in the wider energy sector in the rest of the region. The opportunity to link the massive available geothermal energy resources of the Eastern Caribbean with the petrochemical industry of Trinidad & Tobago through green hydrogen is an especially intriguing opportunity.”
The Energy Chamber, he said will continue to lobby the government for action in this regard while adding that it will continue to promote greater regional integration and the removal of barriers to investment in the CARICOM Single Market and Economy. Importantly, Trinidad and Tobago’s (T&T) Prime Minister, Dr. Keith Rowley has already confirmed that ‘unitisation agreements’ have been executed with the Governments of the Bolivarian Republic of Venezuela, Barbados and Grenada, to allow for the exploration of hydrocarbon resources in the maritime boundaries shared with these countries.
The politician said during the opening of the conference on Tuesday that it is imperative his government moves beyond the intent to co-operate and aggressively pursue opportunities that utilise its extensive expertise and experience in the energy sector. He is hopeful that the said agreements will help T&T revitalise its oil and gas production stock while ultimately strengthening its economy. 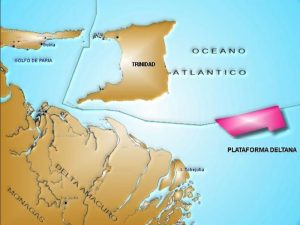 Map showing the shared territorial waters between Venezuela and TT