Haitian migrants at US border: ‘We’ve been through 11 countries’ 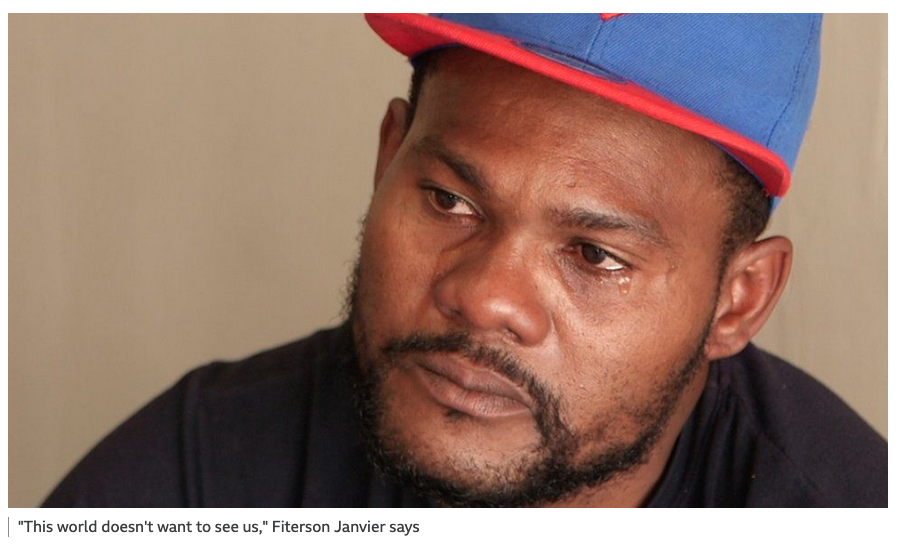 Even in late summer, few migrants attempt to cross into the United States from the Mexican border town of Mexicali. The temperatures are brutal, consistently in the mid-40C. And beyond the neighbouring US town of Calexico, lie many miles of inhospitable desert.

Attempting the journey in the searing heat would be madness.

Yet the migrants gathered in a Haitian restaurant a few blocks from the border wall have already been through worse. Especially Fiterson Janvier and his family.

As they finish a Creole-style meal of chicken, rice-and-beans and plantains, there is both exhaustion and disbelief in their eyes. Exhaustion at their journey from South America over the past few months, and disbelief at some of the things they witnessed and experienced along the way.

“I left my country on 26 August 2014,” explains Mr Janvier, his three-year-old son absentmindedly playing with a toy car on the restaurant floor.

Having spent several years in Brazil, he moved to Chile, met his wife and they had a child. But as they could not move beyond the lowest social rung in South America, they decided the time was right to attempt to reach the US.

“We have been through eleven different countries to get here. Bolivia, Peru, Ecuador…” Mr Janvier begins to name them in order, describing an extraordinary journey on foot and by bus, that traverses the Andes and the Amazonian Basin.

It was a deeply harrowing trip too. 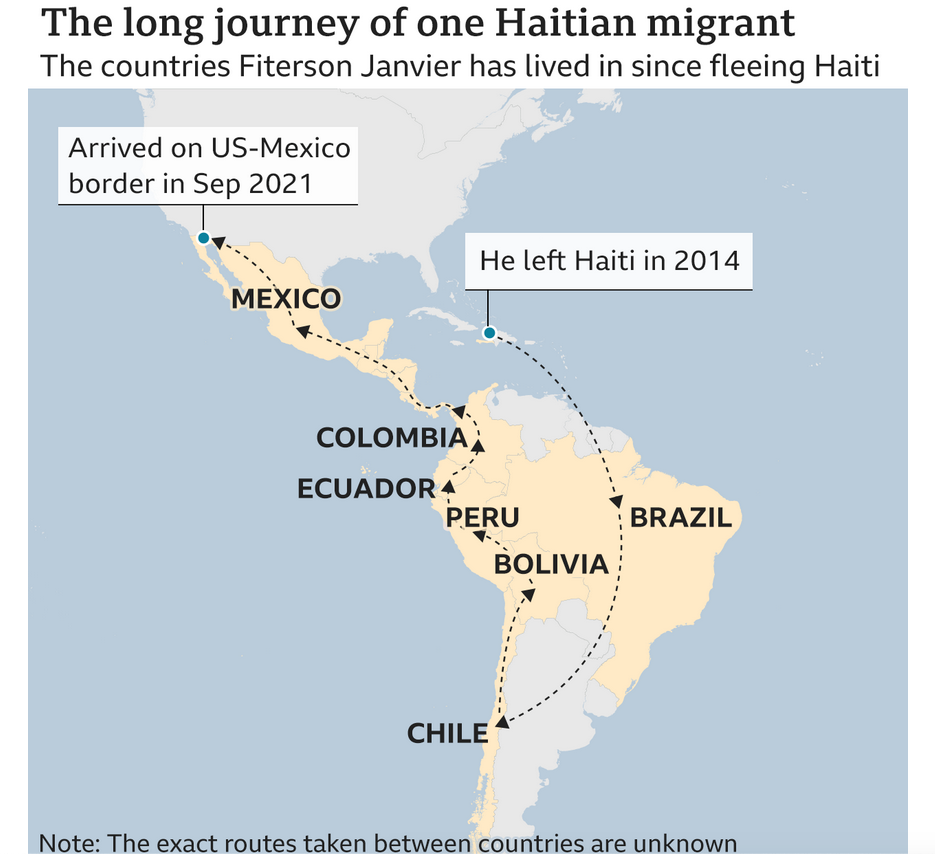 As he took his young family across the Darien Gap, seven days through the dense jungle between Colombia and Panama, Mr Janvier says he saw the dead bodies of other Haitian and Cuban migrants.

He describes being robbed of what little he had by “bandits”, most likely members of violent drug and people-smuggling gangs which operate in the region. He said some of the women were raped, although his wife managed to hide with the child when the gang appeared.

Migrant rights groups estimate that in Mexico alone as many as 80% of migrants have been victimised, extorted or abused on their journey, many of them by the police and the immigration authorities. 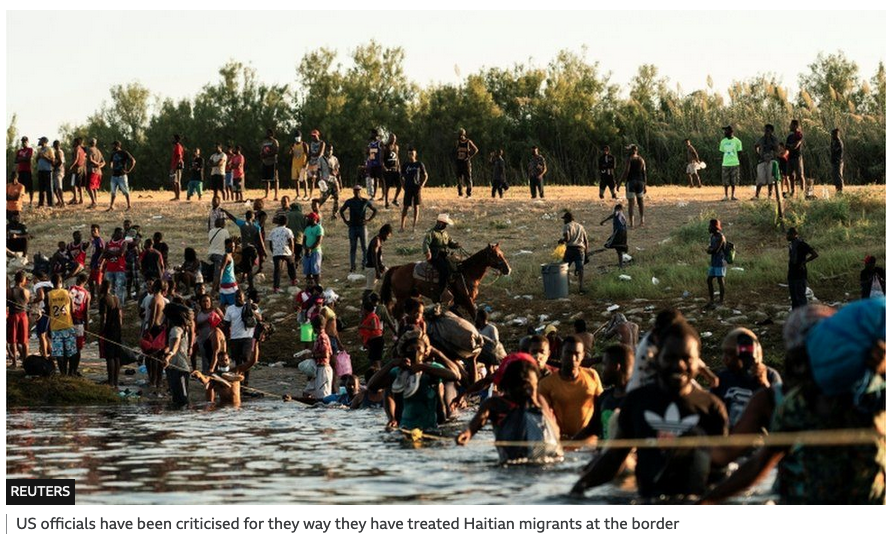 Were it not enough, along the way Mr Janvier received some awful news from home. When a 7.2 magnitude earthquake struck Haiti in August, the worst affected city was Les Cayes – his hometown.

His mother was among the 2,200 people who died in the quake, trapped under the rubble of the family home. His father lost a leg. Mr Janvier shows me photographs of the destroyed house on his phone, and begins to fight back tears.

“I had to keep going. My father has no-one now, the only person who can send him money is my brother [in the US],” he says. “And I need to help too.”

So, the biggest fear for Mr Janvier, and the other Haitians at the restaurant’s plastic tables, is not dying in the desert but deportation.

Haiti is at its lowest ebb in years. The president was assassinated in July, gang violence is spiralling, and the country is grappling with economic ruin and the effects of climate change.

“Haiti is like hell for me now,” he says with seriousness. “There is nothing for me there. Nothing. If they’re going to send me back, they may as well just kill me. Just end it all.” 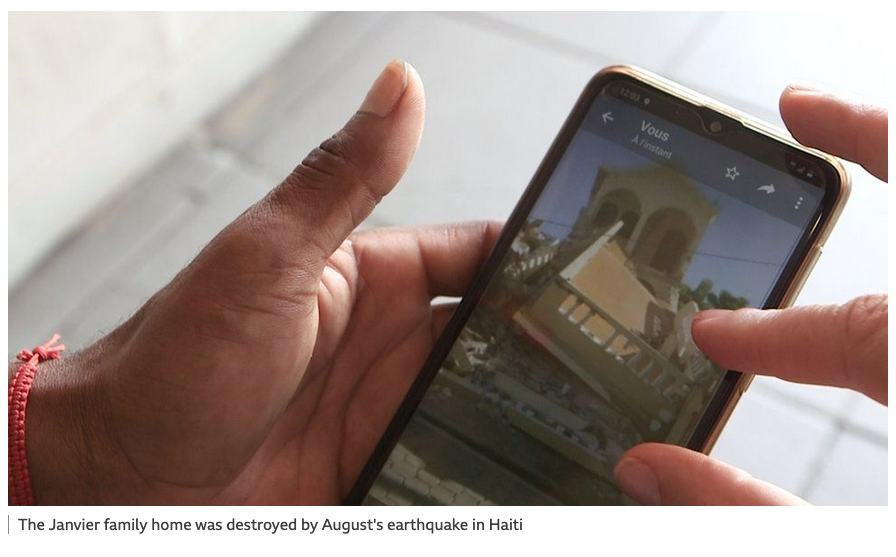 It is not the only time Mr Janvier refers to his journey as a matter of life and death. It is something echoed by Kelly Overton, the executive director of Border Kindness, which provides education, health and legal services to migrants in Mexicali.

“There does seem to be a level of desperation from the families from Haiti right now,” he says. “They say there’s no option to go back, no safe place to go back to, no possibility of a life that’s worth living.”

Amid the uncertainty, it is the impotence – the near-total lack of agency over his circumstances – which hurts Mr Janvier the most.

Not yet uhuru: the African Union has had a few successes but remains weak

ici Haiti - Camp-Perrin : Strengthening of the technical capacities of the Plant Propagation Center

Politicians seek to control classroom discussions about slavery in the US

iciHaiti - Petit-Goâve : Arrest of a member of the «5 seconds» gang

It’s like a warzone – Haitians surrounded by turf wars

iciHaiti - Politic : Meeting between the Minister of the Interior and the Deputy Head of Mission of the American Embassy

Cuba Gets Help From Mexico, Venezuela to Fight Oil Fire

iciHaiti - Security : Preparations for the celebration of the Bois Caiman ceremony

iciHaiti - PNH : Arrest of 4 individuals including a member of «400 Mawozo»

Magnolia species lost to science for 97 years rediscovered in Haiti

iciHaiti - Insecurity : The PNH in action

Juan Soto ready to make an impact with Padres

iciHaiti - FHD : Winner of the final of the inter-university debate tournament

iciHaiti - Kidnapping : «No to collective suicide and its fatality» dixit Arnol Antonin

iciHaiti - 9th Summit of the Americas : The Dominican Government denies having reached an agreement with the PM of Haiti

iciHaiti - International Airport : Arrest of a Nigerian with 1.35 kg of cocaine in his intestine