about an hour ago Updated: 5 minutes ago 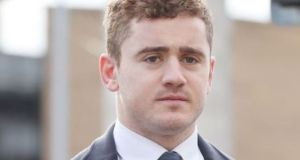 Former Ireland and Ulster rugby player Paddy Jackson: he was unanimously acquitted in Belfast Crown Court of raping a woman. An expert group was appointed after the 2018 trial. Photograph: Niall Carson/PA Wire

Suspects charged with sex crimes should not be named when their cases are before the courts unless and until they are convicted, a group appointed by government after the 2018 Belfast rape trial has recommended.

In a report due for publication today the expert group, chaired by barrister and NUI Galway law lecturer Tom O’Malley, recommends that if suspects were convicted they could be named, as long as naming them did not identify their victims. At the same time, victims would retain anonymity unless they wanted to waive it so the person who attacked them could be named in the media.

Mr O’Malley was asked to carry out his study by then minister for justice Charlie Flanagan, shortly after rugby players Paddy Jackson and Stuart Olding were acquitted of raping a woman at a house party in Belfast.

The group has decided against recommending that sex crime victims be allocated their own legal representation during trials, saying such a move would destabilise how court cases were run.

The report adds judges and others involved in the justice system should have to undergo “specialist training which equips them with an understanding of the experience of victims of sexual crime”.

We have three clubs in this group stage of the Champions League. How did campaigns with two end up?
Solskjaer on transfers: No news. Working with what we have, Manchester United have a big squad
Guardiola confirmed that Zinchenko will stay at Manchester City
Bayern won 5 trophies in a year. To repeat the record Barca need to take another
Flick took 5 trophies with Bayern after 40 matches
Marcel: Alvaro Gonzalez is not a racist. Any accusations against him are unfair and unfounded
Sharonov will enter the headquarters of Cyprus Paphos. The team was led by Ukrainian Mikhailenko
Source https://www.irishtimes.com/news/crime-and-law/all-sex-crime-suspects-should-keep-anonymity-unless-they-are-convicted-report-recommends-1.4323130