As the ice melts, what will become of our planet? 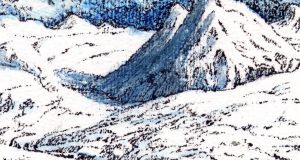 In reconstructing the loss of the planet’s historic ice, the projections of future impacts on coasts and sea levels is becoming a lot more certain. Illustration: Michael Viney

Among the landscapes of western Europe, Ireland’s speaks especially graphically of the scientific age of the Quaternary. This is the chapter of Earth’s history that began with successive ice ages and now reaches into the Anthropocene, the epoch of human impact on the planet.

Nowhere is the sculpting by ice more dramatic than in my own surroundings in Mayo. Between here and the hills of Connemara, the long fjord of Killary Harbour was scooped out by ice. The massif of Mweelrea above us, already a stump of ancient volcanicity, is bevelled by corries and moraines. Its peak once stuck up from the glaciers as a nunatak (a lovely Inuit word), so that climbers at the summit clatter over frost-shattered stone.

The random boulders of our hillside were swept along by ice and more were ground down into the silty soil in which I plant my seedlings. To the north, glacial silt and boulders built the whale-back islands of Clew Bay, launched in the outpouring of the last big thaw.

One surprise of the Quaternary can be that its start is put at 2.6 million years ago, when the cycle of ice ages began in northern latitudes. In between were warm periods, in one of which we live, Homo sapiens evolving into its hyper-active, overpopulated species.

So influential have human processes become that geologists propose a new, late, sub-division of the Quaternary, the Anthropocene. Not all agree on its start date – the rise of agriculture, the industrial revolution, nuclear fission, plastic waste, the extinction of species, have all marked and moulded the planet.

Its impacts will no doubt be rehearsed among the 2,500 international scientists assembling in Dublin on Thursday for the big week-long conference of the International Union for Quaternary Research. Themes from the papers will stimulate multiple sessions in the biggest such science congress ever held in Ireland.

It is organised by the Irish Quaternary Association, formed in 1933, a few years after the international union, focusing research on the island’s historic deposits, notably the peat bogs. It built on the work of naturalists and geologists active since the 18th century. During this time, two words coined from the Irish, drumlin and esker, came to describe the island’s post-glacial landforms as new terms in world geology.

So much for the past. But the opening of the conference by former president Mary Robinson, energetically campaigning on the injustices of climate change, reflects the way Quaternary research is helping models of Earth’s future.

In reconstructing the loss of the planet’s historic ice, the projections of future impacts on coasts and sea levels is becoming a lot more certain. Scientists from Ireland are among the many teams investigating the past of the Arctic. To pluck one Irish example from the long list of authors: Colm Ó Cofaigh, now at Durham University, has worked on six such projects, charting historic flows of ice from Greenland into the north Atlantic and the break-up of the last ice sheet west of Ireland.

Quaternary research deals with humanity as well: how early hunter-gatherers coped with extreme environments, for example, or – this from Chile – how fluctuation in water supply shaped the complex religions of the Incas. Irish studies focus on ancient human, plant and animal migration and settlement. But these, too, can offer curiosities.

Elise Alonzi from Arizona, for example, who researched at University College Dublin, was intrigued with how far people travelled through these islands as part of the life of early Irish monasteries, and how far local people took up monasticism. She took teeth and bones of 88 individuals from five monastic sites and compared their isotopes with geological plant samples, uncovering “patterns of medieval Irish mobility” connected to monastic life.

A more momentous addition to Irish knowledge would be to know when the first human settlers arrived in Ireland. Archaeologists, exploring remains of Mesolithic hunter-gatherer settlements, have put this at not much longer than 9,000 years ago. But in 2016 came radiocarbon proof that a bear’s kneecap with cut marks, recovered from a cave in Co Clare, had been butchered some 12,000 years ago.

Not one stone or bone tool has ever been recovered to prove any human presence in the older stone age, the Palaeolithic. But, spurred on by the Clare discovery by UCD osteologist Ruth Carden, examining museum bones, a 15-strong international team, including Dr Carden, has been exploring another Irish cave with intact Palaeolithic deposits.

“We believe,” says its paper, “that further fieldwork at similar caves in Ireland will eventually lead to the discovery of decisive cultural evidence for an Irish Palaeolithic. It is only a matter of time.”

In Bulgaria, too, there are problems with the virus: there are 16 cases in one team (it seems that it was caused by one player of the opponent). But it reached the semi-finals of the playoffs!
Ronaldo: The fight against racism is not for the sake of blacks, but for the sake of each of us. No one is born a racist
Joleon Lescott: Messi and Ronaldo are super freaks! Sterling follows them
Maurizio Sarri: Now is not the time to think about Lyon. Atalanta is very good, it is difficult to play against them
De Bruyne has no intention of leaving Manchester City, even if the club is banned from the Champions League
Zlatan on Rangnick in Milan: I don't even know who it is
Abraham fulfilled the conditions for an automatic extension of his contract with Chelsea until 2023
Source https://www.irishtimes.com/news/environment/as-the-ice-melts-what-will-become-of-our-planet-1.3952662

From masks to polls, here's what's happening in the US presidential contest right now

Opinion: 25 years ago today, the UN let Srebrenica happen. Now, it is allowing history repeat itself in Syria

'Sorry Mr Marley, you can't play here' - Playing football with a music icon before a famous gig in Dublin

Pub inspections to continue this weekend

A proper football man who brought the game into Irish hearts: Jack Charlton (1935-2020)

What's in a black hole

Indoor Irish - films and shows to watch at home

Abolitionist Frederick Douglass was anti-Catholic - should we care?

LIVE NOW: Shilelagh Law performing in support of Hope for the Warriors!

WATCH: Shilelagh Law performs in support of Hope for the Warriors!